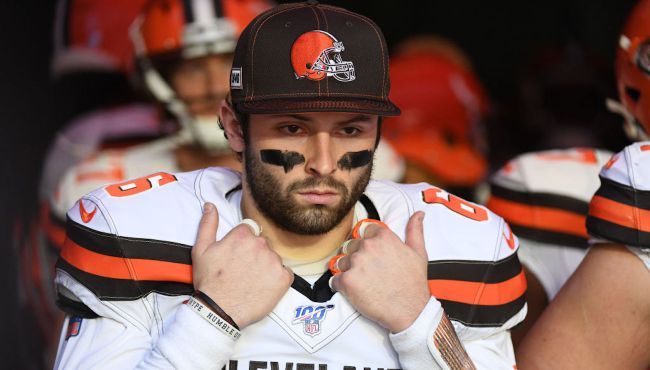 As a New York Jets fan, I certainly know a thing or two about highly-touted young quarterbacks falling from grace before they crash and burn entirely.

In my lifetime alone, to one extent or another, I’ve seen Mark Sanchez, Geno Smith, and Sam Darnold all strut into town as the apparent next Broadway Joe before being shipped off to another franchise to see their career slowly peter out. So far, nothing about Zach Wilson tells me his fate will be any different. Fingers crossed I’m wrong.

Still, that said, I find what’s happening to Baker Mayfield to be pretty stunning, as the former #1 overall pick as now found himself in what amounts to NFL purgatory, as his current team doesn’t want him, while no other team has swooped in to save him as of yet. While Mayfield may have struggled this year, this is still a guy who led the CLEVELAND BROWNS to a postseason victory.

According to a recent report, while interest in Mayfield remains, the reason the likes of the Seattle Seahawks and Carolina Panthers haven’t made an official move for the signal-caller is due to his salary.

Jeff Howe of The Athletic reports that a “holding pattern” exists with Mayfield and that the Panthers and Seahawks remain interested in him. The problem continues to be the amount of Mayfield’s $18.8 million guaranteed salary that Cleveland will pay, and that his next employer will carry. Mayfield can play, if healthy. He’s currently not healthy, which reduces the urgency to resolve things.

Then there’s the Deshaun Watson situation. If Watson ends up being suspended for a significant piece of the season, the Browns may need Mayfield. Before they can do that, however, they need to rebuild the bridge to Baker. [via ProFootballTalk]

Training camps across the league will begin in late July, so both the Browns and Mayfield are likely hoping the former Oklahoma Sooner can fid a new home before then.