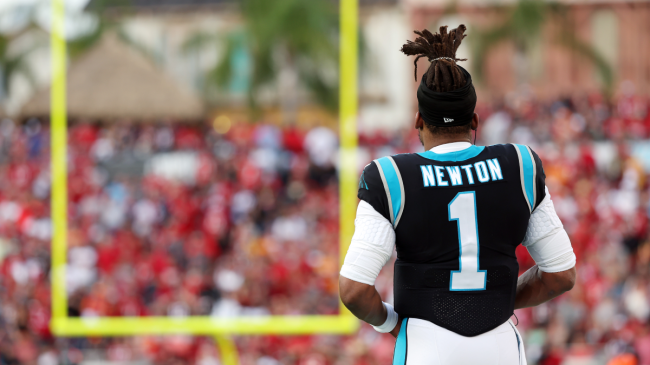 The Carolina Panthers are struggling offensively behind new addition Baker Mayfield. Mayfield was believed to be an upgrade to what the Panthers had seen under center over the last few seasons, but it now appears that that’s not the case.

Mayfield is averaging 187 passing yards per game, throwing four touchdowns and three interceptions. He’s led Carolina to a 1-3 record after last Sunday’s loss to the Cardinals.

Baker again looked mediocre in that most recent defeat.

The poor play has led to a potential change at quarterback, though that decision may rest on the health of backup Sam Darnold. Darnold is dealing with a high ankle sprain suffered in camp.

With limited options at the quarterback position, and a growing dissatisfaction with Mayfield under center, many Panthers fans are hoping a familiar face returns to Charlotte.

Panthers fans are hoping the team takes a flyer on Cam Newton, who led the franchise to a Super Bowl appearance earlier in his career. Newton joined the roster for a few games last year following an injury to Sam Darnold. Could we see something similar in 2022?

Carolina’s relationship with Newton is a bit odd.

Fans loved Newton in his prime as he became an unstoppable force in both the run and pass game. He was named MVP after posting a 15-1 regular season record in 2015, leading the Panthers to the Super Bowl. But when his skills began to deteriorate with age and injury, a number of fans were happy to see him leave following a five-win 2019 campaign.

Many noted Newton’s sideline demeanor and poor attitude for their dismay. The organization didn’t think twice about releasing him that offseason.

Now, they’re begging for a return. Newton played eight games with the Panthers last year, though Carolina lost each of his five starts. That doesn’t seem to be deterring any supporters, though, after seeing Mayfield struggle over the first four matchups.

Take a look at what folks are saying on social media.

Many are distraught seeing how the QB position has been mismanaged over the last few seasons. Some say Newton should’ve been handed the keys to the offense in 2022 rather than the team trading for Baker Mayfield in the first place.

The Panthers have fumbled the QB position so horribly since releasing Cam a few years ago. It’s just sad to see

This fan asks, “How does Baker Mayfield have a job and Cam Newton doesn’t?”

How does Baker Mayfield have a job and Cam Newton doesn’t?

Newton still believes he’s good enough to play in the NFL. If things continue to trend downward for the Panthers, maybe we’ll see a reunion before the season’s through.