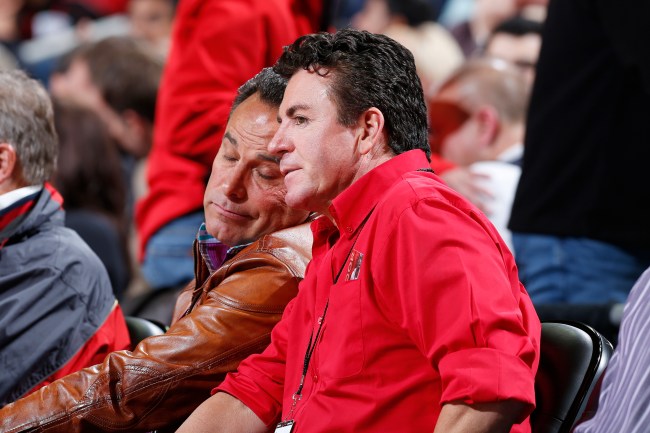 The day of reckoning has come for the Lousiville Cardinals. They have been shunned by former superfan Papa John Schnatter. The former CEO of Papa John’s was seen rooting for Cardinals’ rival Kentucky Wildcats during their game on Saturday afternoon.

The #19 Wildcats needed all of the support for them to edge the #3 Cardinals at the Rupp Arena. The game was close throughout, neither team led by more than six points during regulation, and the contest went into overtime where Kentucky prevailed. Did Kentucky have a secret weapon to defeat Louisville? Was former Papa John’s CEO John Schnatter the difference-maker for the Wildcats?

Schnatter was recently an avid Louisville supporter until he was forced to step down from his position on the University of Louisville board of trustees, and they took his name off their football stadium and business school after he donated over $1 million.

During the rivalry game, Papa John was sitting behind the Kentucky bench decked out in royal blue and rooting hard for the Wildcats against the Cardinals. Such a betrayal.

Papa John is a wild guy for becoming a Kentucky fan lmao pic.twitter.com/GP4XA7PPQ2

Papa John Schnatter right behind the @KentuckyMBB bench wearing blue at the @LouisvilleMBB game. Maybe that has something to do with Louisville taking his name off their football stadium. pic.twitter.com/pyPWI1Rfx8

The internet was ready and willing to mock the college basketball turncoat.

Papa John switched up on Louisville like the Verizon guy did with Sprint. pic.twitter.com/f8hOngIFkb

In February, Schnatter also appeared in KU gear behind the Wildcats’ bench during their game against LSU.

In 1984, Schnatter founded Papa John’s in his father’s tavern. Now there are approximately 5,200 Papa John’s locations. On January 1, 2018, Schnatter stepped down as the Papa John’s CEO after he made comments criticizing the NFL for the national anthem protests by the league’s players in November 2017. Papa John said a racial slur during a conference call and then resigned as chairman of the board on July 11, 2018, after massive public pressure.

Papa John would have the last laugh, because in November Schnatter informed the world that he had eaten “40 pizzas in 30 days” in a bizarre interview. Also, during the interview, Papa John promised a “day of reckoning” would come.

"The day of reckoning will come"

the papa john day of reckoning is upon us https://t.co/n18tjTCRnm

Bill Murray at Kentucky vs Louisville. A legend amongst us mortals. pic.twitter.com/cWHtgE0j8J