Oddly, Pat Freiermuth Would Really Like It If People Would Stop Calling Him ‘Baby Gronk’ 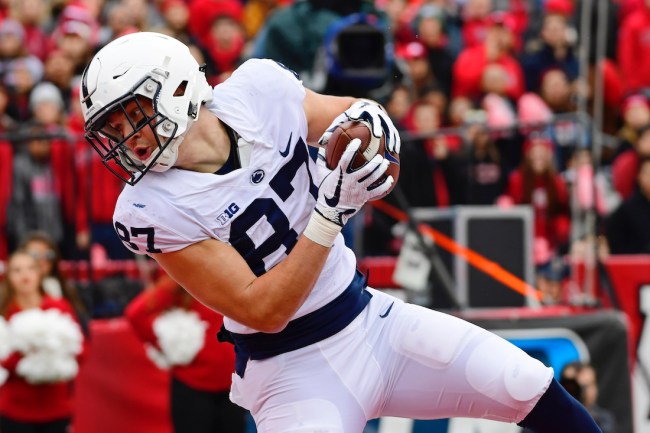 Taken by the Pittsburgh Steelers in the 2nd round of the 2021 NFL Draft, Pat Freiermuth has the looks of a bullish tight end who can cause some serious matchup problems for opposing defenses. He’s a big, wide target — measuring 6’5″ and weighing 258 pounds — and he’s deceptively quick, clocking in at 4.72 seconds in the 40-yard dash. With his physical attributes, talents and jersey number (No. 87), some may even see comparisons to Rob Gronkowski.

Here’s a fair warning though: If you see a little bit of “Baby Gronk” in Freiermuth, keep it to yourself, because the rookie tight end literally can’t stand the nickname that has suddenly become popular.

While most tight ends would feel honored to be compared to a future Hall of Famer in Gronk, Pat Freiermuth finds it a little annoying, and says he really hopes Steelers fans stop referring to him that way. Just look at what he told 247 Sports about the nickname.

“I guess it came about because I’m from that area, wore (No.) 87 and obviously Gronk played for the Patriots a long time and I kind of grew up watching him,” Freiermuth said on Friday, via 247Sports. “I hate it because you know, I think it’s pretty annoying to be called baby Gronk. I’m trying to get away from that nickname, so I don’t want to be called that.”

As much as Freiermuth dislikes the whole “Baby Gronk” thing, let’s be honest, there are way worse things to be called. Never mind that, it’s not as if the comparisons aren’t justified, with both being physical who can impact a football game by simply fighting off linebackers or defensive backs — especially in the red zone, when these types of pass-catching tight ends always seem to make a difference for quarterbacks.

Whether Pat Freiermuth just wants to make a name for himself and not live in the shadow of an all-time great like Rob Gronkowski, or he’s really just weirded out with the comparisons for some reason, here’s to hoping Steelers fans can come up with something unique that he actually likes as a nickname. If the kid ends up living up to his 2nd round billing, he’ll probably have a slew of options to choose from — especially if he delivers the type of career Gronk has.