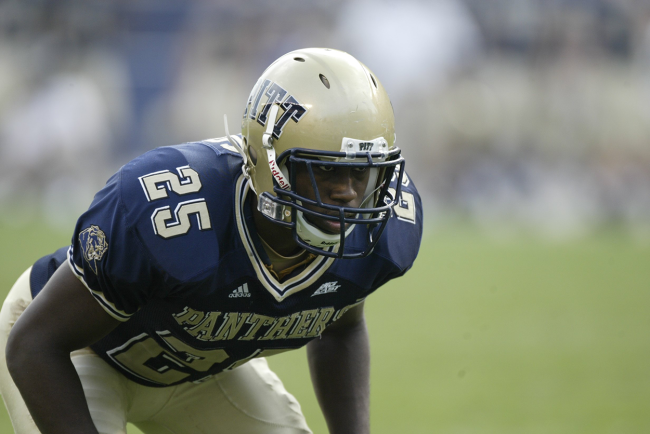 Darrelle Revis will become eligible to be elected into the Pro Football Hall of Fame in 2023. If/when he gets in, he will become only the 11th cornerback to enter the Hall of Fame on the first ballot.

It will be well-deserved for one of the greatest defensive backs to ever do it.

Before his 11-year career in the NFL, Revis was a lockdown corner at Pittsburgh. He recorded 80 total tackles in two years as a starter and intercepted four passes, including two returned for touchdowns. Perhaps more importantly, while stats are one thing, opposing offenses chose not to throw the ball his way because they knew it would not end well.

Pat McAfee, however, cannot say that he applied the same strategy. The eight-year NFL punter turned sports analyst and professional wrestler gave Revis the ball and it did not end well for him.

Back in 2006, McAfee and Revis faced one another in the Backyard Brawl between Pitt and eight-ranked West Virginia. It was a back-and-forth game in the first half and the Panthers actually took a three-point lead into the locker room.

Part of that lead can be attributed to a Revis punt return. With just over two minutes left in the second quarter, McAfee booted the ball away.

Revis did not handle it at first. It soared over his head and he had to backtrack to field the punt. And then the defense swarmed in and he backtracked some more.

But that didn’t stop him from getting loose.

As you watch the electric return, pay extra mind to the block by No. 81 at the seven-second mark. Derek Kinder deserves a shoutout for obliterating not just one, but two Mountaineer defenders and clearing the path. Revis did the rest.

West Virginia went on to win the game 45-27 and went on to finish the season at 11-2, so McAfee got the last laugh. But Revis forever holds bragging rights over McAfee after his electric return.