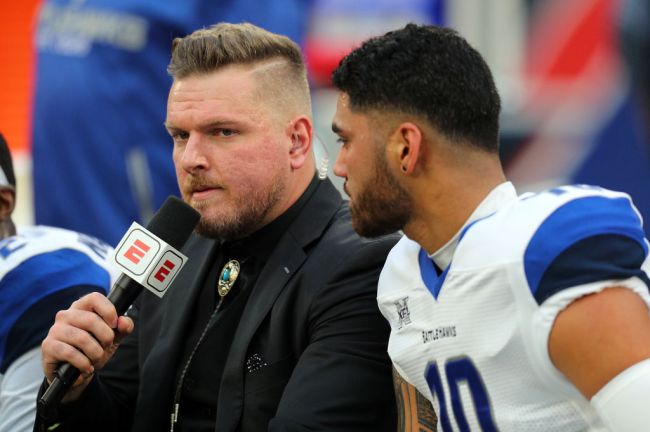 Am I the only one that turns on Monday Night Football and does not feel that same buzz in the air and electricity that used to come firing through our TV sets the way it did during the Jon Gruden days? And with the outrageous 10-year, $100 million contract the Raiders dished out to him, nobody can fault Gruden for immediately leaving the booth and heading to the sidelines.

To me, nothing screamed Monday Night Football more than the good old days of seeing Ron Jaworski, Mike Tirico, and Gruden just dominating that booth together. You were always in for a wildly entertaining four quarters. So before we continue to jump all over guys like Booger McFarland, Steve Levy, Brian Griese, and others that have taken on the role since, let’s not lose sight of how tough of an act they have to follow. Having said that, there continues to be one man that I truly think has the energy, and the ability to bring MNF totally back to life, that man is none other than Pat McAfee.

We need energy, we need laughs, we need entertainment, and a whole lot more to really complete the Monday Night Football experience. If you follow his show, “The Pat McAfee Show,” you would know that McAfee brings all of that to the table. Nonstop, in your face, hooting and hollering type humor while also being a guy that knows and understands the X’s and O’s of the game. He may not know them the way Tony Romo does, but stick a guy like Griese (who currently works the MNF booth) in there with him and let him handle that aspect of the game.

The laughs and entertainment viewers have gotten from McAfee working other NFL games in the past is too good to not give this idea another shot. Be sure to subscribe and give a listen to The Brilliantly Dumb Show where we spoke with McAfee about his quest for the MNF job and the troubles he has faced finding his way into that holy grail of a gig.