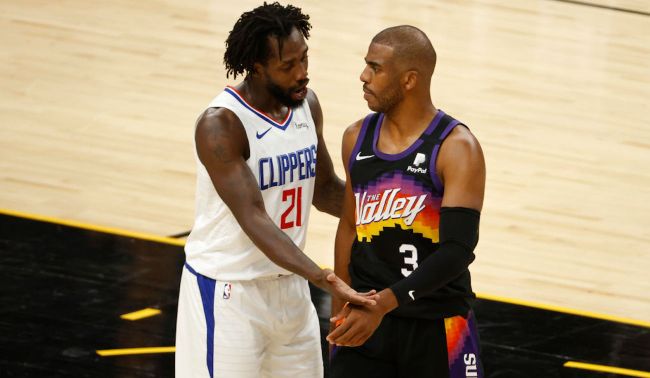 Minnesota Timberwolves guard Patrick Beverley, who has established a reputation as one of the league’s elite defenders despite making just one All-Defensive First Team during his decade-long NBA career, was a guest at ESPN Southstreet Seaport Studios in New York City on Monday and used a majority of his airtime to fire shots at Chris Paul.

Appearing on both Get Up and First Take, Beverley — who already chirped Chris Paul on Twitter last night following the Suns’ pitiful Game 7 loss — fired shots at Paul, saying that, unlike Stephen A. Smith, he *does not* consider Paul to be one of the game’s greatest-ever point guard. He also compared Paul’s defensive abilities to that of a practice cone.

“Do I go to bed at 10 pm the night before playing Chris Paul? Hell no,” Beverley told Mike Greenberg and Stephen A. Smith on First Take. “But if I’m playing Steph Curry tomorrow, I’m going to bed at 8 o’clock and telling my girl not to call me!”

Pat Bev on @GetUpESPN: "CP can’t guard anybody man. Everybody in the NBA know that. You know those cones in the summer that you dribble around? What does the cone do? Nothing. He’s a cone… It’s just that y’all don't want to accept that. Give him the Ben Simmons slander."

"They benched the wrong person. They should've benched Chris."

Pat Bev letting it rip on @GetUpESPN this morning

How Pat Bev doing CP3 and the Suns pic.twitter.com/xuVD6sLl7w

Pat Bev is on First Take CHOOSING VIOLENCE 😭😭😭 this is like an ether of Chris Paul and the Suns. he’s been waiting to get this s — t off his chest

During the Suns’ crucial Game 7, the 37-year-old future Hall of Famer had just 10 points, four assists, and one rebound. To be fair to Paul, though, he wasn’t the only member of the Suns to underperform when it mattered most, as their other two stars, Devin Booker and Deandre Ayton, also had abysmal games. Booker, considered one of the league’s best players, had just 11 points, two assists, and three rebounds, while Ayton had just five points, two assists, and four rebounds.

Following their Game 7 victory over the top-seeded Suns, Luka Doncic and the Dallas Mavericks will head to California on Wednesday night to take on Steph Curry, Klay Thompson, Draymond Green, and the Golden State Warriors.