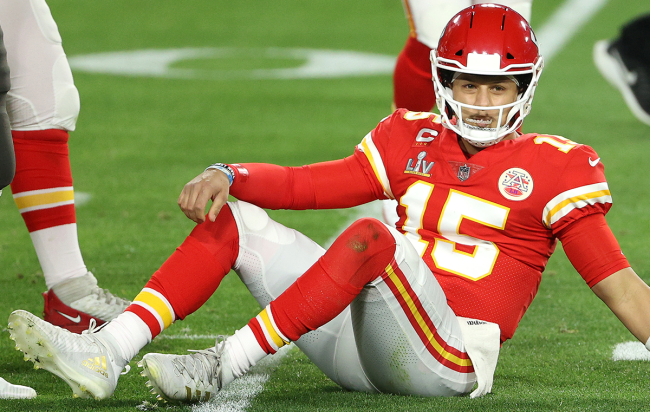 Super Bowl LV promised to be an epic showdown between Tom Brady and Patrick Mahomes, the latter of whom has only needed a few seasons to establish himself as the heir to the throne the legendary quarterback was poised to cede if the Chiefs managed to come away with a victory on Sunday night.

Kansas City was slightly favored heading into a game where Patrick Mahomes would have to overcome the turf toe he’d been dealing with over the course of the postseason, and while he did basically everything in his power to deal with the adversity, the same can’t be said for most of the members of the porous offensive line that forced the quarterback to scramble almost 500 yards over the course of a contest that was all but over by the time the first half wrapped up.

Mahomes was obviously nursing that ailment during a Super Bowl where he was still able to showcase the insane amount of talent he possesses, and now, Ian Rapoport reports he’ll be undergoing surgery on Wednesday to fix the torn plate in his foot in the hopes he’ll be able to return to form by the time next season begins.

It’s not clear what the 2021 offseason will look like, but Patrick Mahomes will almost certainly be off the field for it as he recovers. But most importantly, Mahomes should be good to go for the 2021 regular season. https://t.co/2sNE25RzxD

Even if Mahomes had been healthy, it’s hard to imagine the outcome of the game would’ve been much different based on how dominant Tampa Bay was, and to his credit, he didn’t make any excuses after the loss, opting to simply thank Chiefs fans for believing in him and turning his attention to next season.

Thank you #ChiefsKingdom for all the support. Wasn’t the way we wanted it to end, but we will be back! 💪🏽

However, the same cannot be said for his mother and fiancée, the first of whom called out Gisele Bündchen while trying to blame the loss on the referees—a route her future daughter-in-law decided to go down as well while also directing her ire at ESPN’s social media team for having the nerve to highlight the fact that Mahomes didn’t seem too thrilled about his team getting its ass kicked.

As a result, I’m sure it’s only a matter of time until at least one of them decides to deploy the turf toe excuse in an attempt to discount what the Buccaneers managed to pull off in Super Bowl LV (or his brother hops on TikTok to do the same while dancing). With that said, props to Mahomes for managing to play through the injury, and here’s to hoping he’ll be fully recovered by the time the fall rolls around.