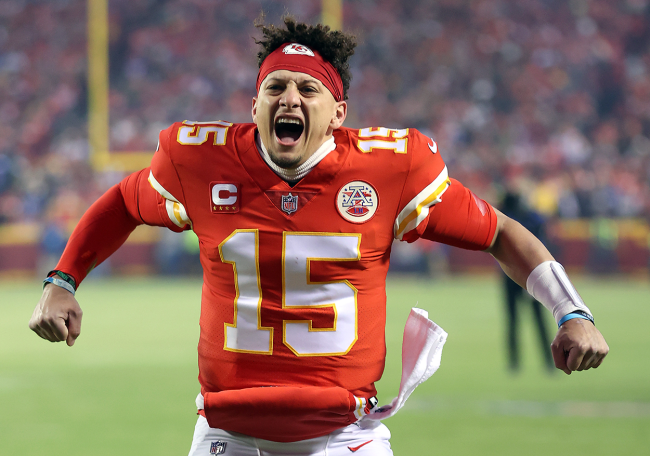 Patrick Mahomes stands 6-foot-3, 230 pounds but doesn’t look as big as some of his NFL counterparts. That doesn’t mean he isn’t just as strong as his teammates and fellow NFLers around the league.

On Friday, as the offseason nears the halfway point, Mahomes was putting in work at the Team APEC training facility in Texas. Health, performance and player development consultant Bobby Stroupe posted a video of the Kansas City quarterback grinding on a sled drill that is intended to improve frontal plane pattern stability.

It is very simple.

Mahomes was tasked with pulling what looks like 13, 45-pound plates using only one arm. He cannot pull from behind and walk forward, he must stay turned to either side— left or right.

Mahomes, with upwards of 600 pounds on the sled, is moving with relative ease. There is no denying his strength.

If you see in the back of the video, another player is struggling with the drill (although it looks like he has more weight on his sled), which makes it even more impressive for Mahomes.

That’s an NFL back. This isn’t easy work

However, despite Mahomes crushing the exercise, NFL fans immediately had questions about its practicality and whether it is actually worth the hype. The debate was especially loud after the official NFL twitter account reposted the video.

Here is some of the back-and-forth:

You aren’t the owner of the chiefs

With ease…. Bro was literally using all his body weight. 😂😂

Totally easy and bad for his back. That’s why a renowned professional athletic trainer is having him do it. 🤡

1. James Harrison was a linebacker
2. He's pushing it forward and has leverage
3. Mahomes is pulling it with one arm sideways with ease and is a quarterback

Dude is sneaky strong and fast!

Good way to injure yourself

What a stupid ass thing to have him doing

At the end of the day, a trainer who knows what he is doing is having Mahomes participate in the drill. It isn’t just something that he made up and, clearly, there is a reason that the trainer is having him do the drill. It’s impressive.