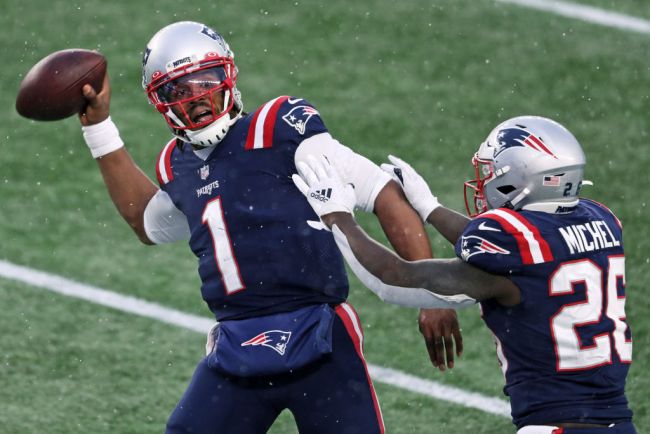 In a 24-hour stretch, the Patriots went out and spent $87.5 million on two free-agent tight ends. New England gave Hunter Henry $37.5 million over three years and Jonnu Smith $50 million over four years. That’s all fine and well, and it’s pretty clear Bill Belichick is looking to recreate some sort of two-headed tight end monster like he previously had with Rob Gronkowski and Aaron Hernandez, but Cam Newton is still expected to be under center, or at least in the mix, which makes these two signings interesting.

In less than 24 hours, the Patriots have guaranteed over $137.5 million, placing them second in NFL history for most guaranteed money in a free-agent signing period. The record could be theirs before free agency officially begins at 4 pm Wednesday. pic.twitter.com/fEyRItUjvL

The Patriots recently signed Newton to a one-year, incentive-heavy contract that could see him make up to $13.6 million next season. He went from making the league-minimum on his last deal to possibly making just shy of $14 million after the worst season of his career. You can blame the bad season on him or the lack of talent around him, but at the end of the day, he was still as mediocre as quarterbacks come. In 15 games played, Newton threw for eight touchdowns and 10 interceptions.

The incentives in Newton’s new contract are team-friendly and they’re based on starts, playoff berths, etc. To be fair, the contract indicates that it is still very much in play for the Pats to go and draft a quarterback in the NFL Draft, as it’s a ‘prove me wrong’ deal for Newton.

However, there’s no way the Pats didn’t have Newton in-mind when they went out and signed both Henry and Smith because as it stands right now, he’s the only serviceable quarterback on the roster.

Newton is going to be in the mix and he’s going to have a spotlight on him whether or not he’s the starter come Week 1 or not. Maybe a two-tight end system will benefit him, or maybe the more old-school look will only hurt Newton and the Patriots even more. Sure, it worked in the past, but Smith and Henry aren’t Gronk or Hernandez, and Newton, nor any quarterback they draft, is going to turn into Tom Brady.

The signings of Henry and Smith make the Pats better and will likely get New England fans excited given the team’s success in the past with two big-time tight ends on the field together. After all, production from the tight end position last year for New England was nearly non-existent. With that being said, it could just be a giant smokescreen if Newton is the best option come the start of the season and he shows yet again that he’s not the same Newton we saw years ago. If he’s not able to flip that switch while fitting into what appears to be somewhat of a new-look system, then the Pats will be missing out on the playoffs yet again.