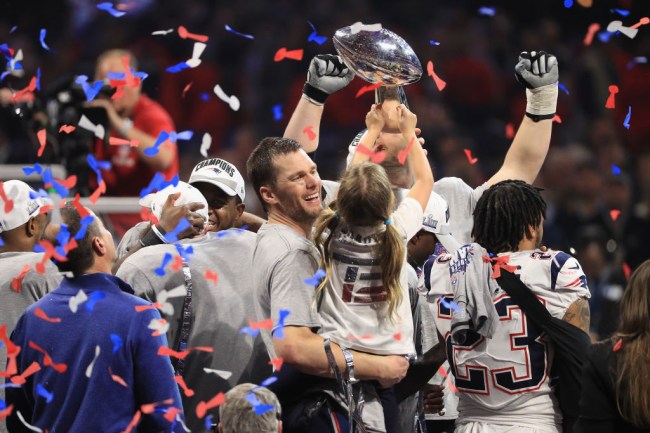 When Super Bowl LIII came to a close, my initial reaction was to feel sorry for the people at NFL Films who would be burdened with the task of somehow figuring out a way to make it seem like it wasn’t the absolute snoozefest that it was.

Plenty of fans held out hope that the Rams could stop the Patriots from taking home yet another title, but much to the chagrin of basically everyone outside of New England, the Pats would ultimately win the defensive battle and secure the franchise’s sixth Lombardi Trophy (which was promptly dented by Rob Gronkowski in the most Gronk move ever).

The victory made Tom Brady the first person in NFL history to need two hands to hold all of his Super Bowl rings, and on Thursday night, the quarterback officially added another piece of hardware to his collection and was more than happy to show it off.

However, that picture comes nowhere close to capturing the majesty of the Patriots’ newest rings, which are reportedly the biggest pieces of team-issued Super Bowl bling in the history of the league.

Here’s a closer look at what Brady is rocking.

The greatest ring of all-time. pic.twitter.com/Vv5AHmVGhS

There’s a lot to digest there but the Patriots were nice enough to release a handy video showcasing the most notable aspects of the ring, which boasts 422 diamonds—108 of which commemorate the number of practices the team held last season—20 sapphires to honor their 20 AFC East Championships, and a few of the organization’s signature slogans.

All about the details. pic.twitter.com/sIAtMCId4M

That’s how you celebrate.