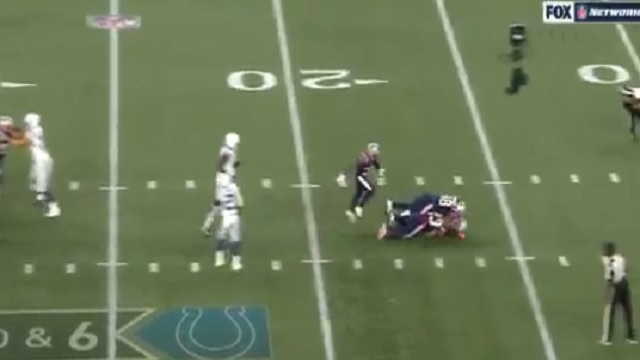 This offseason the NFL adopted a controversial roughing the passer penalty that prohibits defenders from landing with their weight on top of QB’s.

This week the NFL’s competition committee held conference call to discuss the rule but they ultimately decided that nothing would change this season.

The league announced that its competition committee conducted a conference call Wednesday evening “to discuss the enforcement of roughing the passer rules with a specific emphasis on the use of body weight by a defender.”

The group reviewed infractions of the rule, which has been in place since 1995 but is being re-emphasized in the name of quarterback safety, from both this season’s games and last year’s.

Per the NFL’s executive vice president of football operations, Troy Vincent, the committee ultimately “determined there would be no changes to the point of emphasis approved this spring or to the rule.

During tonight’s Colts-Patriots Thursday night game, Colts fans were up in arms when Andrew Luck was crushed by two defenders but somehow didn’t draw a roughing the passer penalty.

Brady gets tapped on the helmet: Roughing the passer!

Good thing the NFL didn't change the roughing the passer rule based on that conference call last week. Patriots took a team picture as they were landing on Andrew Luck for that sack and yet there were no flags. But no changes were made to the rule. Wink. Wink.

So andrew luck isnt protected by the roughing the passer call. Stupid AF

To make matters worse, Tom Brady was able to draw a roughing the passer penalty after Colts player barely touched him on the helmet.

Andrew Luck gets bodyslammed by three guys, no flag

Tom Brady get slapped in the face mask: Roughing the passer

This roughing the passer bs is getting out of hand. Tom Brady gets lightly slapped and it’s roughing the passer, Andrew Luck gets double teamed driven to the turf and no call? Where’s the consistency? What are we even doing? #patriots #colts #football #nfl pic.twitter.com/xxDT5F72H5

TOM BRADY GETS FLICKED IN THE NOSE AND ITS ROUGHING THE PASSER BUT CARSON WENTZ GETS PUNCHED IN THE FACE AND NOTHING. IM DONE WITH FOOTBALL.

Left: No roughing the passer, you literally can’t even see Andrew Luck under two (2) Patriots defenders

Najee Goode just touched Tom Brady's helmet, with his palm, and got a roughing the passer penalty. #FullContactSport