RIP To The Paul George-Damian Lillard Beef, Which Appears Over After Family Members Got Involved 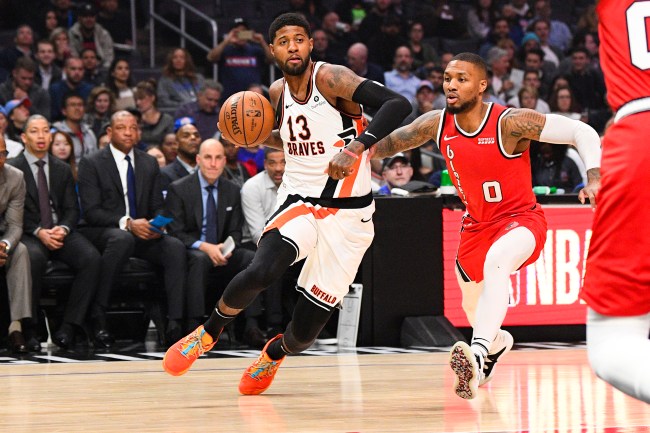 2020 continues to ruin great things. The latest example? The Paul George-Damian Lillard beef, which was one of the better individual rivalries we’ve seen in sports over the past couple of years.

The two All-Stars began their beef the usual way: with lots of shit-talking and a competitive spirit that fueled them to get the best of the other. It was fun. It was pretty harmless. It resulted in one of the great sports pictures of the past decade — which can be seen below, and came after Lillard hit a game-winning, series-clinching three during the 2019 NBA Playoffs that Paul deemed a “bad shot.”

If that wasn’t all enough, we saw the Paul George-Damian Lillard beef in full effect during a recent Blazers-Clippers game, with PG13’s teammate, Patrick Beverley, mocking Lillard’s “Dame Time” from the bench, tapping their wrist and waving goodbye after Lillard missed back-to-back free throws in crunch time.

After the game, Lillard downplayed it all, saying Beverley’s actions were just a sign of respect for some of the things the Blazers guard had previously done, per Yahoo! Sports.

“I’m not offended by it. If anything, it should just tell you how much it hurt them to go through what I put them through in those situations previously.”

George addressed the public spat in his postgame interview, as well.

If it seemed like this whole Paul George-Damian Lillard beef was about to be taken to the next level as the NBA Playoffs approached, hoops fans were ready for it. Hell, even since the mocking by the Clippers, Dame has been playing like a man possessed, averaging 56 points in the two contests since. Yes, seriously, 56 POINTS PER GAME!

Players with 112+ points over a two-game span in the last 50 NBA seasons (via @EliasSports):

Sadly, all the fun seems to have come to a halt.

According to Yahoo! Sports’ Chris Haynes, the Paul George-Damian Lillard beef is apparently squashed, after the two players cleared the air because family members got involved and made things a bit too personal — as Lillard’s sister called George’s girlfriend a stripper, and George’s lady responding by saying Lillard’s sister is a cow.

This just took a wild turn

Haynes’ report can be seen below, which all but proves the George-Lillard beef is gone and lost forever. Pour one out, guys, because this thing was just getting to be must-see drama.

My @NBAonTNT report on Paul George reaching out to Damian Lillard to discuss the back and forth banter that took an ugly turn once family members got involved. pic.twitter.com/DnGv5fG5rb

Sources informed me that George reached out to Lillard to clear the air, explaining that he had no beef and clarified that it was just competitive banter on his part. Sources say Lillard apologized for remarks made by one of his family members, but stated why he said what he said after that loss to the Clippers. Both stars relayed that there were no hard feelings. — Chris Haynes

Whether you blame the year 2020 on not being able to have nice things, George and/or Lillard’s family members for being involved or something else, it’s sad to see the Paul George-Damian Lillard beef come to an end. Here’s to hoping it gets revived in the postseason should the two meet again, because it’s fucking epic to watch them exchange barbs. For now, we’ll have to survive off Lillard feeling disrespected and trying to start shit with Skip Bayless instead — which just doesn’t seem to have as much intrigue as his beef with George.