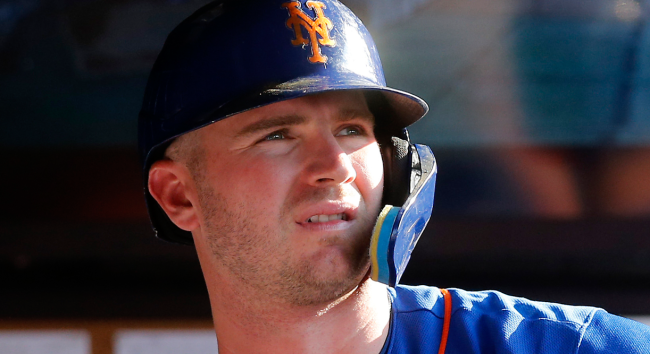 Back in March, on his way to Spring Training with the Mets, first baseman Pete Alonso narrowly escaped serious injury or even death when his truck flipped three times.

The “brutal” accident, as he described it, was caused by another vehicle that ran a red light as he was passing through an intersection. His wife was in a separate car following him and later shared some frightening video of the crash which, luckily, only left the people involved with minor injuries.

Alonso, after reporting to Spring Training following the accident, appeared rather nonplussed by the whole thing, even taking the field the day after the crash.

“I’m just so happy, every day’s a gift, and today is really special for me,” he told the media the day after the incident. “I just had a blast out there today doing work, seeing everybody — I don’t think I’ve ever been happier showing up to spring training. Again, it’s truly amazing how I’m here. I’m so fortunate that everyone’s okay.”

It turns out though, that despite his nonchalance about the whole thing back in March, the accident still bothers him quite a bit.

The Mets slugger, who currently leads Major League Baseball in RBI with 72, admitted in a story published Wednesday in The Players Tribune that he has been suffering from post-traumatic stress disorder (PTSD) ever since that day.

“I haven’t talked a ton about it since it happened, but the car accident I was in earlier this year is something that has really impacted me on several different levels,” he wrote.

Alonso continued, “When something like this happens to you, there’s so much that cycles through your mind. There are a ton of what-ifs involved. I mean, my wife was driving right behind me. If that other driver had arrived at that intersection two seconds later, he would’ve hit her instead.

“And even beyond that, there are just a lot of things that have gone through my head since I got hit. A big accident like that, when it happens to you, I don’t care who you are, it’s not easy. No matter how strong you might think you are, it can still be rough in a lot of different ways. I’m still dealing with some pretty bad PTSD from it, to be completely honest with you. And I feel very fortunate that I was able to recognize that. That I’ve been able to talk through it with some people. I mean, over the past several months I’ve really been leaning on some people that I trust and hold close. I’m continuously working through everything.

“But it’s not something that quickly fades away — at least not for me. It’s going to take some time, and that’s O.K. I’m just going to keep working to navigate everything and be the best husband, son, brother, friend and teammate I can be,” he explained.

“Mainly, though, I’m just extremely grateful that I’m still here. I’m truly blessed. And from here on out, I really want to continue to do good things and have a positive impact on others. After the accident, it’s not just about having survived, it really is about making the most of all the time that I have left.”

Next up for Pete Alonso is trying to become the first player in MLB history to win the Home Run Derby three years in a row as part of the 2022 All-Star Game festivities on July 18 in Los Angeles.