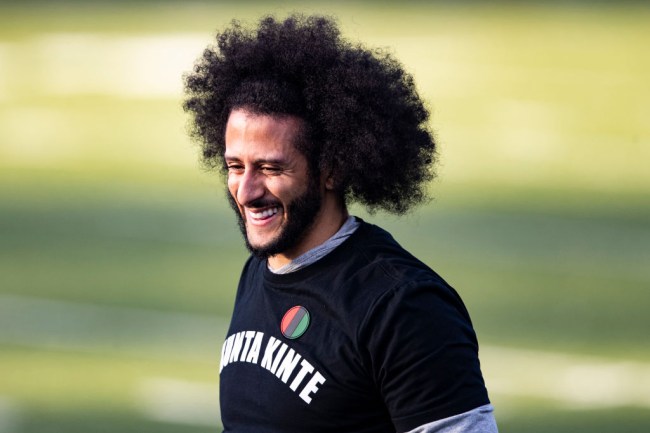 Earlier this week, the “Days Since There Have Been New Rumors About Colin Kaepernick Preparing For A Comeback” counter that seems to have constantly reset itself since he played his last NFL game in 2017 dropped back down to zero yet again when sources told TMZ the quarterback is following a training regimen that one insider claimed has gotten him into “the best shape of his life.”

The news came 60 days after Kaepernick reportedly reached out to the Jets shortly after the internet was bamboozled into believing he’d signed a one-year deal (I guess maybe he thought he could convince them the news was real?) and right after a weekend where millions of Americans took to the streets in response to the police brutality he attempted to call attention to when he kneeled during the national anthem during his final season in the league.

The former 49er failed to find any suitors following his widely publicized workout last November, but with the issue that sparked his protests back in the forefront, a number of NFL players have come forward and said they believe he deserves to be on a roster—including Akiem Hicks, who roasted Mike Glennon to a crisp while explaining his rationale.

It seems like every team in the league has been “reportedly” interested in signing Kaepernick at some point over the past few years—including the Seahawks, who offered him the chance to workout in 2018 only to rescind the invitation after he refused to agree to the stipulation that he would stop kneeling if they offered him a contract.

On Thursday, Pete Carroll chatted with reporters and reflected on the situation while treating us to what appears to be a little bit of revisionist history, as the coach claimed he declined to sign Kaepernick because he believed he could be a starter and didn’t want to relegate him to serving as Russell Wilson’s backup—a decision he says he now regrets.

It doesn’t appear Seattle has any interest in signing him at this point in time either, but during the call, Carroll revealed he was recently contacted by an unnamed head coach who is apparently exploring the idea of giving Kaepernick another chance to prove himself.

Pete Carroll says he got a phone call today from a current NFL head coach interested in Colin Kaeprrnick. Says that’s that first call he’s receiving about Kap since they brought him back in 2017.

Historically speaking, the Colin Kaepernick Comeback News Cycle follows a pattern that begins with him gearing up for a return followed by unspecified teams claiming they’re interested only for nothing to come to fruition before the whole thing inevitably starts again. Is there a chance things could be different this time? Sure, but I’ll believe it when I see it.