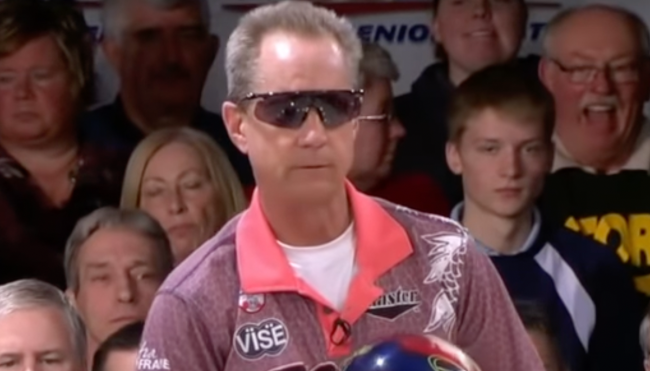 Professional bowling has never really managed to take America by storm, but if you’ve ever found yourself watching ESPN2 on a weekend over the past couple of decades, you’re likely familiar with Pete Weber, a man who is inarguably the most electric and entertaining personality the sport has ever produced (which admittedly isn’t saying very much.)

If it weren’t for Weber, I’m not sure if the words “controversial” and “bowler” would’ve ever been placed next to each other, but over the course of his storied career, the man who is basically the PBA’s version of Walter from The Big Lebowski managed to rustle plenty of jimmies thanks to his fiery demeanor—including the truly iconic moment where he uttered the words “Who do you think you are? I am!” to taunt a spectator he accused of distracting him after winning his fifth U.S. Open title in 2012.

He also had the privilege of being parodied by Tim Robinson in an episode of Documentary Now!, which is arguably a bigger honor than any of the many awards and accolades he racked up when he followed in the footsteps of his dad Dick Weber, a fellow bowling legend who started teaching his son how to roll when he was just two years old.

Sadly, all good things must come to an end. This week, Weber officially bowled his last frame as a professional before hanging up his shoes and dropped a quote for the ages before his 41-year career officially came to an end with a spare.

Pete Weber, known for his emphatic reactions and celebrations, has bowled his final frame on the PBA National Tour. pic.twitter.com/bDSEFMFhC5

Weber may have been fairly reserved in that video, but the same cannot be said when he was interviewed in the wake of his final game and asked to reflect on the biggest win of his career. It turns out the moment he’s best known for is also the one he looks back on the most fondly, and while he brought back the legendary quote, he also decided to spice it up a bit by tossing in an f-bomb on live television.

Classic Pete. I wouldn’t want to see him go out in any other way.