A Petition To Forbid Cris Collinsworth From Calling Any More Eagles Games Has 87,000 Signatures 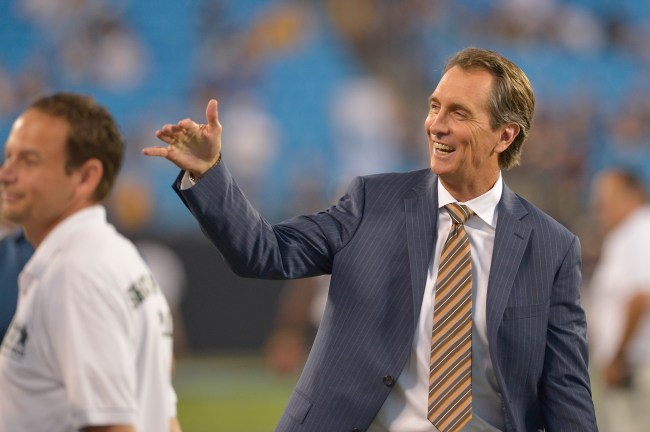 The city of Philadelphia is collectively peeling themselves off street corners as I write this, winding down the 48-hour alcohol-fueled celebration for its team’s first championship in the Super Bowl era.

They are hungover and looking to vomit all over NBC analyst Cris Collinsworth, who they believe was rooting against them during Super Bowl LII. Colinsworth took exception to the legality of a few of the Eagles’ biggest plays, including the Zach Ertz 11-yard touchdown with 2:22 left in the game.

“I don’t know. That ball comes loose,” said Collinsworth on Ertz’s touchdown. “I’m not even taking a guess…I think they have to overturn it.”

And, after Corey Clement’s 22-yard touchdown in the back of the end zone was upheld, Collinsworth said:

Eagles defensive end Chris Long stirred the pot when he took to Twitter to question Collinsworth’s calling of the game.

He also thought it’s my job to run with Tom Brady w QB wheel route on a reverse pass. Lmao.

Now, the city of Philadelphia is taking action. A Change.org petition has been created, titled, ‘Never Have Cris Collinsworth Commentate On Another Philadelphia Eagles Football Game.’ 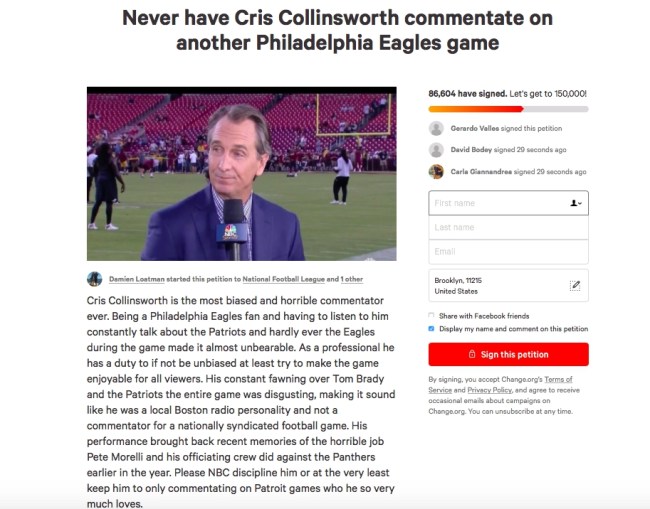 “Cris Collinsworth is the most biased and horrible commentator ever. Being a Philadelphia Eagles fan and having to listen to him constantly talk about the Patriots and hardly ever the Eagles during the game made it almost unbearable. As a professional he has a duty to if not be unbiased at least try to make the game enjoyable for all viewers. His constant fawning over Tom Brady and the Patriots the entire game was disgusting, making it sound like he was a local Boston radio personality and not a commentator for a nationally syndicated football game. His performance brought back recent memories of the horrible job Pete Morelli and his officiating crew did against the Panthers earlier in the year. Please NBC discipline him or at the very least keep him to only commentating on Patroit games who he so very much loves.”

At the time of me writing this, the petition has close to 87,000 signatures.