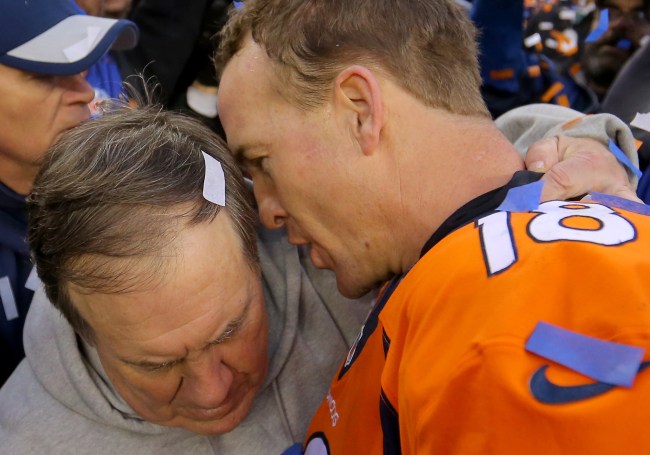 When it comes to knowledge of the game of football, there are no greater students than Super Bowl-winning head coach Bill Belichick and Hall of Fame passer Peyton Manning. They’ve forgotten more about the sport than most will ever know, and it’s shown throughout each one’s illustrious careers.

Football fans alike would love an opportunity to sit in on a conversation between the NFL legends to discuss strategies and gameplans. What would a meeting of the minds produce, and would they be willing to give up their top secrets to their heated rival?

We may now have some insight into that very question.

According to Total Pro Sports, Seth Wickersham revealed a surprise encounter between the two at a Pro Bowl lunch a while back. In Wickersham’s book, It’s Better To Be Feared, he describes the meeting in detail with one hilarious story about the NFL stars.

Belichick and Manning were reportedly trying to get each other drunk while sitting poolside on a Pro Bowl weekend. The motive behind the mass consumption?

To steal the secrets of their rival.

This was apparently a move that Manning turned to frequently as he often tried to “mine” for gameplans of opposing players. Once the alcohol began to set in, players were more eager to unveil a few of their team’s hidden gems before facing the star quarterback.

Unfortunately, in the case of Belichick, the tactic didn’t work. In fact, Wickersham writes that it had the reverse effect on the legendary coach as he became more tightlipped. That’s saying something considering Belichick’s stone-cold persona at times with the media.

“Alcohol seemed to strengthen their hardwired urge to lie… At the end of four hours, they gave up.”

If you’re wondering about the drink of choice: Belichick is a Corona guy while Manning stuck to Budweiser. Manning wasn’t able to snag the X’s and O’s from Belichick, even with the help of the smooth Mexican lager. Still, it makes for a hilarious story between two NFL greats.