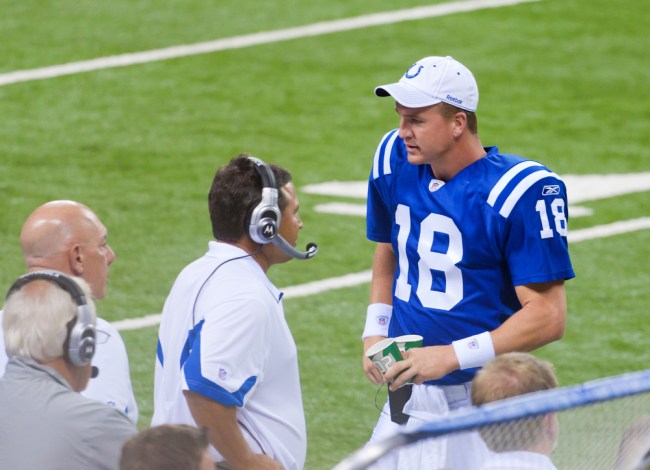 A statue of Peyton Manning was unveiled yesterday in Indianapolis honoring the greatest quarterback in Colts franchise history. Peyton Manning might’ve finished his career with the Denver Broncos, but he’ll always be remembered best for his time with the Colts, and that’s the team he’ll almost certainly enter the NFL Hall of Fame with.

From 1998 through 2011, Peyton Manning was the king of Indianapolis. He was the most recognizable face in the city, a celebrity of astronomical proportions. Under those circumstances, it wouldn’t have been strange if Peyton Manning retreated from the public eye and spent all of his time at home in between practice, games, and sleep. But, Peyton’s so-called ‘man cave’ wasn’t at home, it was a hidden area within Indy’s infamous St. Elmo Steakhouse.

A long profile on the Indy Star over the weekend dove into just how awesome Peyton’s secret steakhouse man cave was. Here are a few excerpts:

Employees at St. Elmo know Manning’s routine at his favorite Indianapolis restaurant. He enters the building like James Bond. He parks his car out front. He quickly enters through a door adjacent to the main entrance, giving him quick access to the restaurant’s elevator.
Not everyone knows St. Elmo has an elevator. You need a passcode to operate it. Manning has his own passcode. He also has a nickname among restaurant staff. They call him “The Eagle.” (via)

I guess it’s worth pointing out that ‘The Eagle’ is the same nickname the Secret Service used for Bill Clinton during his 8 years in the White House. That should give everyone an indication of just how revered Peyton Manning was around Indianapolis, and still is to this day.

It’s easy to see why Peyton loves the “Manning Room” at St. Elmo. It has a large table for dining, and as a gift to Manning, a TV screen is embedded into the wall. The room didn’t have a television when Manning first joined the Colts in 1998 and began his close relationship with the restaurant. During one visit, Huse was talking to Manning and the conversation went something like this. (via)

Sounds pretty nice, doesn’t it? Being able to roll into one of the best steakhouses in America, eat whatever you want, watch whatever you want on TV, and have total privacy because they’ve set you up a secret man cave with your own elevator, nickname, and more. That’s living the fucking dream right there.

So what exactly was Peyton Manning eating and drinking in his man cave?

t was the beginning of a great friendship. Huse made sure everything was how Manning wanted, including his usual order.
“New York strip, salad, potato, Bud Light,” Huse said.
Over the years, St. Elmo has been a place for Peyton to celebrate special occasions. After the Colts defeated the Chicago Bears in Super Bowl XLI, and Manning was named MVP, he brought the Vince Lombardi Trophy to the restaurant. Manning asked Huse if he should keep the trophy in a private setting to avoid making a commotion, or did he want Manning to parade the trophy around the restaurant.(via)

Peyton’s St. Elmo’s Steakhouse man cave was so important to him that he even gave the steakhouse a shout out in his retirement speech back in 2016.

I’ve never been to St. Elmo’s Steakhouse. In fact, I’ve never even been to the city of Indianapolis. But I’ve heard absolutely phenomenal things about that revered dining establishment over the years and after reading through these incredible Peyton Manning stories on the Indy Star I’m adding this steakhouse to my bucket list. You can and should read the full interview with the steakhouse’s owner by following that link above.

I guess, based on this picture that was taken a day ago, Peyton still goes out of his way to eat at the steakhouse anytime he’s in town.