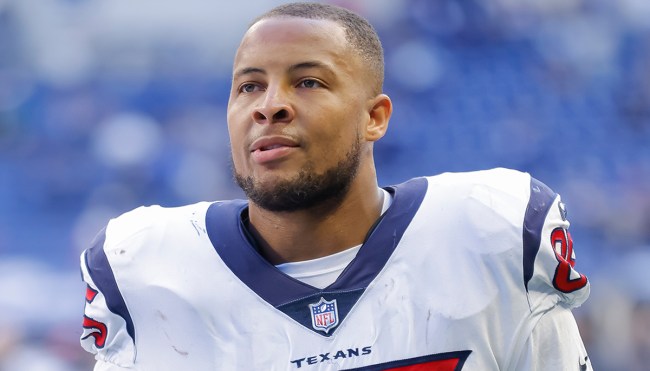 One of the biggest recurring storylines of virtually every NFL offseason revolves around players like Zach Wilson and Lamar Jackson who spent a good chunk of their free time bulking up in the weight room. There are also usually some guys like Leonard Fournette who roll up to training camp looking bigger for all of the wrong reasons (although it didn’t take long for the running back to sort things out).

You can also usually count on a few players to devote the spring and early summer to slimming down a bit for various reasons. This year, that lists included Texans tight end Pharaoh Brown, who decided something needed to change after posting a total of  171 yards on 23 catches during the 2021 campaign, which was a career-high in both categories but still left plenty to be desired.

Brown admitted that was the case while chatting with The Houston Chronicle, saying, “Last year was not one of my best years. I think it was a learning lesson. So I changed everything.”

That all-encompassing pivot included a renewed focus on his weight. After playing the previous season at 280 pounds, Brown said he managed to cut that number down to 262 (along with a reduction in body fat percentage) in the hopes of becoming more explosive off the line and making himself a bigger passing threat.

Every expert will tell you weight loss starts in the kitchen, and Brown said he had a bit of a breakthrough after taking a closer look at his diet and realizing one of his biggest issues was a fairly interesting BBQ sauce habit that would make Mark Zuckerberg proud:

“I’d eat healthy, but I’d bathe all my meat with Sweet Baby Rays, so it was like all the sugar and high fructose corn syrup you don’t really notice.”

When you consider each two-tablespoon serving of Sweet Baby Ray’s will set you back 70 calories, it’s easy to see how that would add up.