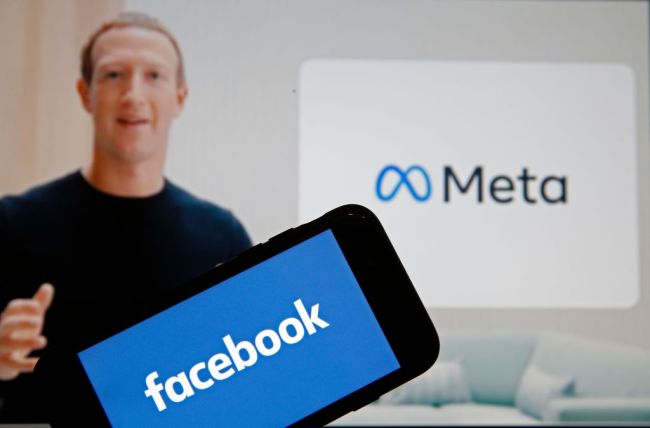 Mark Zuckerberg really wants to convince you that he is just a normal guy. The 37-year-old media magnate continues to do everything in his power to maintain a “regular guy” persona and his most recent video is no exception.

However, now, those applications will fall under the brand “Meta.” Zuckerberg announced the change with a video on Thursday afternoon.

During one part of the announcement, Zuckerberg was shown in what appeared to be his office. Whether intentional or not, there was a bottle of barbecue on his bookshelf.

Reason 1,192 why Mark Zuckerberg might be a robot pic.twitter.com/pT6ox5RP4G

If it was intentional, it was a strange way of trying to connect with “the common folk.” If it was not intentional, it is an incredibly strange thing to have on a bookshelf, serving as a book end.

The barbecue sauce, which was Sweet Baby Ray’s, has cause quite the stir on the internet. Although Sweet Baby Ray’s is delicious, its placement was bizarre and everybody was going nuts over the weird bookshelf decoration.

Here is what the people had to say:

Survey says you might be a lizard person too 🦎

I too keep a bottle of BBQ sauce in my library. pic.twitter.com/KZQETG2hBe

Today's Facebook Connect event features Zuckerberg desperately trying to be in on the joke — check the bottle of Sweet Baby Ray's sauce on the bookshelf pic.twitter.com/zBf1XXsuNu

Zuckerberg is the type of guy who gets brisket from Franklin BBQ and slathers it with Sweet Baby Ray’s sauce. pic.twitter.com/HQFg0ZSnHg

I love Sweet Baby Rays too but it lives in the kitchen Zuck you fucking weirdo. https://t.co/XycFsRQ0hI

There's a single error in his AI coding algorithm that mistakes Sweet Baby Rays for a bookend https://t.co/aRkmFjTFnP

You know in stories where aliens are trying to pass for humans but they get things off just a little bit?

If this isn't proof we are in a simulation idk what is pic.twitter.com/u8yrwUKDvw

Zucc out here trying to be quirky and relatable with a bottle of Sweet Baby Rays pic.twitter.com/4zsOKquffi

Zuck is just like us! Sauce on the living room shelf pic.twitter.com/nq0QdWISzN

There is only one logical explanation for this strange bookend and it has to do with his now-famous video of Zuckerberg smoking meats.

If you are unfamiliar with Zuckerberg’s love of meat smoking, get a load of this:

For someone who loves his barbecue, Sweet Baby Ray’s is a strange choice. While it is undeniably the best commercial barbecue sauce on the market, shouldn’t he be more into the specialized barbecue sauce market?