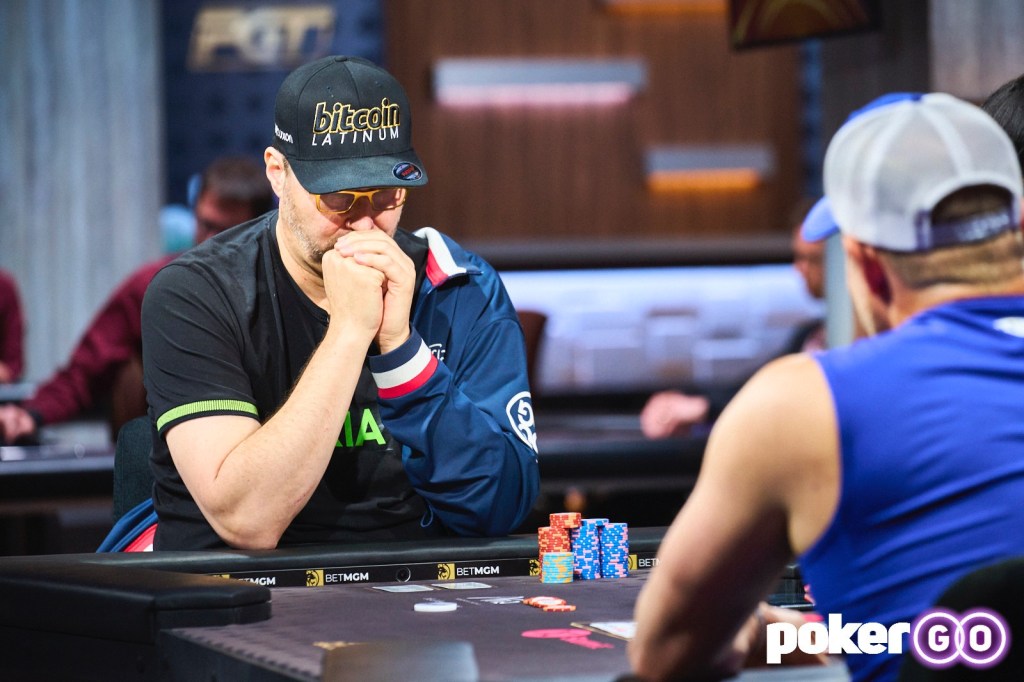 Via Courtesy of PokerGo

The poker world was hit by a tidal wave on Thursday night. Phil Hellmuth faced Eric Persson in the $25,000 PGT Heads-Up Showdown Round of 32. For anyone who isn’t familiar with that format, it’s a “heads-up” tournament where players face each other 1 vs 1 in each round. And there’s a video below of the full heads-up match so you can see just how surreal it was.

Phil Hellmuth is the most accomplished tournament poker player in history but he didn’t stand a chance against Eric Persson who used vulgar and vile insults to put get under Phil’s skin and put him on tilt. On top of that, Eric was getting some of the best hands imaginable. He hid quad Kings in a heads-up match, one of the best possible hands in poker!

It’s wild to write this but Phil Hellmuth really didn’t stand a chance against Eric Persson. Not with the crappy hands Phil was getting and because Phil allowed himself to be psychologically manipulated in a way that’s never been seen before at the poker table. And just as an FYI, there is some vulgar language in the videos and tweets below.

😱😱😱😱 is this the angriest we've seen @phil_hellmuth??? pic.twitter.com/kcy45bnywY

Persson repeatedly crossed the line. At one point he stood up and threw double middle fingers at Phil Hellmuth. That would’ve gotten Eric Persson penalized in any regular tournament according to Hellmuth. Things got so bad that Phil demanded the tournament’s director come over and give him ‘protection’. Both players were issued warnings but there should’ve been intervention before Phil had to ask for it.

I’m not 100% sure where the best place to start watching this heads-up match is but I’ve set the video to start around 1hr44min and you’ll quickly get a sense of what’s happening:

The Poker World Reacts To The Shocking Match

Daniel Negreanu has a bit of a reputation as a nice guy in poker but he’s worked his absolute hardest to squander that over the past year by attacking Phil Hellmuth’s legacy as the best tournament player ever. Hellmuth has 16 World Series of Poker bracelets, 6 more than the people in second place (Phil Ivey, Johnny Chan, and Doyle Brunson).

Daniel Negreanu has 6 bracelets. So when he started attacking Phil’s legacy last year it was incredibly odd. And now Daniel seemed to be reveling in the fact that Phil lost heads-up after being berated with obscenities. This actually led to Hellmuth blocking Negreanu on Twitter last night:

Embarrassing Phil even for you!

For decades you have ruthlessly berated people at the table, and now one guy (Persson) gives you a taste of your own medicine and you cry like a child

No one in poker history is more deserving of behavior penalties than you pic.twitter.com/vam94af2Pi

What is Daniel Negreanu’s goal with these tweets exactly?

Hellmuth acting like the poor victim cause that guy was being mean to him.

He dishes it out for decades, but can’t handle one dude giving it back to him. https://t.co/zDu98980x2

What I just witnessed was hard to put into words. Cliffs:

Hellmuth asking the floor to give the other guy a penalty for berating him, while simultaneously calling him a mother fucking asshole. https://t.co/ZJh29w6cKO

Now, the flip side of all this is that Phil Hellmuth has had the most successful tournament poker career of any player in history and he’s done it using similar psychological tactics. Hellmuth doesn’t cross the line though and that’s what seems to be lost on a lot of the poker world after Thursday night’s heads-up match.

And after Phil knew he was going to lose the match, on the last hand, he congratulated Eric Persson for successfully getting under his skin.

From where I’m sitting, I don’t see how anyone can watch that heads-up match between Phil Hellmuth and Eric Persson and think that Phil had a shot in hell. (1) Persson repeatedly crossed the line and his jabs got viler as he realized the tournament’s director wasn’t going to do anything (until they were warned). (2) Eric Persson was hitting hand after hand after hand and Phil was getting nothing. Sure, he could’ve tried to dig deeper and play more aggressively but he was dealing with a psychological onslaught from a guy in a blue tanktop talking about some weak cash game at the Bellagio.

Phil will likely be talking about this heads-up match for a long time. I think PokerGo will 100% be trying to orchestrate a rematch between these guys because it’ll be great for ratings but I sincerely doubt Phil will agree. He’s wealthy, he gains nothing from the tiny bit of extra exposure. But here’s what Phil Hellmuth was sharing on Twitter late into the night and what he had to say himself:

I couldn’t have said it better myself: https://t.co/g4zSlBw5k3

(2/2) Also, pretty sure PH has NEVER flipped🖕, called some1 “fkn bitch” from the jump w no provocation, etc. Again-not defending PH past actions- so if Perrson wanted to do same after bad PH play, fine. But people comparing the two situations, I truly don’t get it. Thoughts??

(3/3) – I’m also at complete loss for why DNegs has seemingly made it his personal mission to tear down Hellmuth literally any chance he gets publicly, but, that’s neither here nor there (regardless of how sad it is to c 2 of my “poker idols” relationship deteriorate this way)

Here are Phil’s own words:

1 You wanna be a gladiator in the biggest arena? You wanna strive for greatness? Then you will have critics and haters. And, when “They” find a new reason to attack, big or small, then they come out in droves (like the lemmings most of them are). Today, in this last emotional

2 ..10 hours, I feel the full brunt of all of that criticism. [I have “blocked” a ton of folks today, esp those that “weigh in” w unbalanced and wrong opinions]. Now, I question my own Ego: and yes, I recognize that my Ego is too big right now. I feel upset, and unsettled.

3 Over the last 10 hours, it appears that the critics and haters have won. But, have they? No. Although “They” have succeeded in making me miserable for 1/2 a day, they have prodded me to take stock of myself, and caused a healthy reduction of Ego. As I lick my perceived wounds

4 ..I remember I am truly blessed w health/family/friends, and great great successes. I remember I made 12 final tables in my last 60 tourneys. I will wake up in a great mood (like always). I will jump back into that arena, and chase greatness, chastened by critics and lemmings!

What happens next in the poker world? 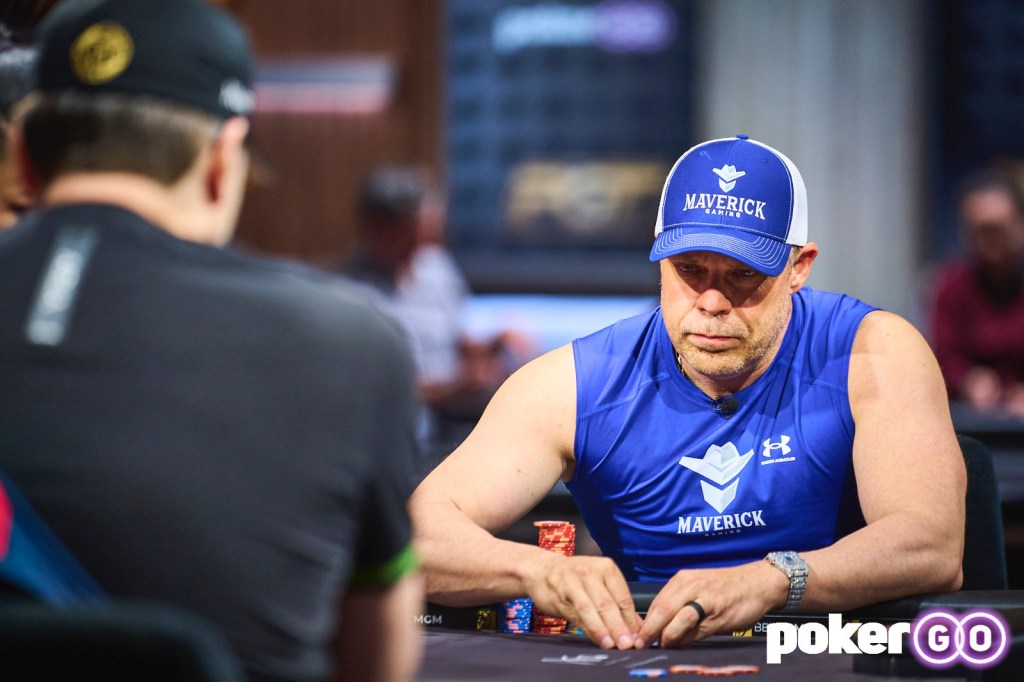 Via Courtesy of PokerGo

Tournament directors now have a problem on their hands. After what everyone witnessed in the $25,000 PGT Heads-Up Showdown Round of 32 it’s clear that the legendary Phil Hellmuth can be rattled if someone is willing to cross the line over and over again. Fellow poker pros will have seen this.

That match will be a topic that players will try and bring up when playing against him to throw him off his game. And tournament directors will now have to actively monitor how Phil’s being treated by fellow players at the table because that’s not Phil’s job to do it himself. As he said, he “needed protection” in that match, something I’ve never heard from a poker pro before.

For a full rundown on the $25,000 PGT Heads-Up Showdown Round of 32, you can click here to see who else lost and advanced.