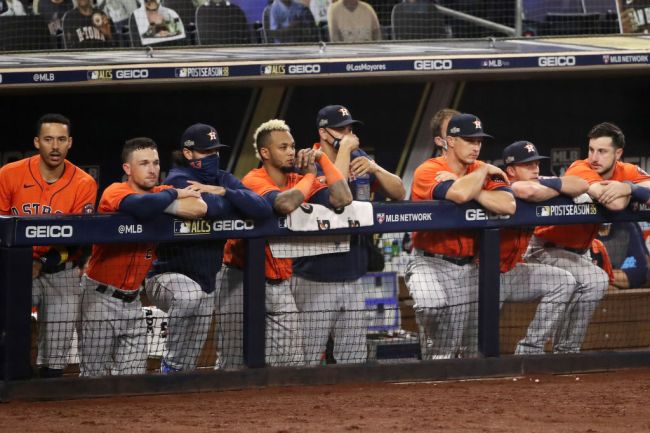 After coming back from a 0-3 deficit in the ALCS, the Houston Astros lost game 7 to the Tampa Bay Rays on Saturday night.

Baseball fans were quick to dump all over the Astros for losing the elimination game. This guy was probably ecstatic.

Even former Yankees and Twins pitcher Phil Hughes felt like taking a shot on the Astros.

Hughes sarcastically mocked Houston, saying the team elimination was a “shame” before calling the Astros “clowns” and undeserving of their playoff spot.

Man that’s too bad for the Astros. One game away from the World Series after being a sub .500 team this year. Shame. Clowns

“Man that’s too bad for the Astros,” wrote Hughes. “One game away from the World Series after being a sub .500 team this year. Shame. Clowns.”

The Astros have had their share of haters this season, from Joe Kelly and his wife to Stan Van Gundy.

The 4-2 loss to the Rays at Petco Park in San Diego did bring a sub-par season to an end for the Astros but their run through the playoffs to get to the ALCS was impressive.

The Rays now wait for the winner of Game 7 of the Dodgers and Braves series.