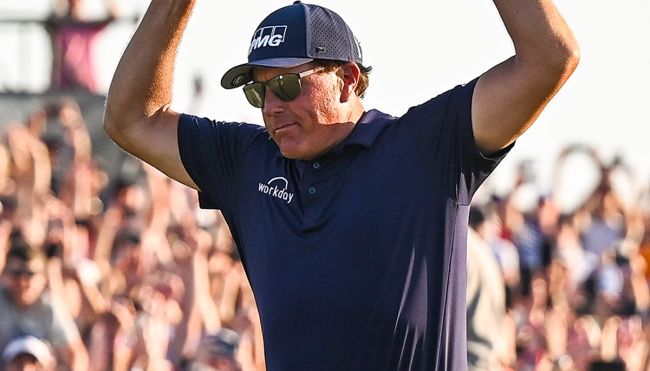 You could argue there are other trophies in existence that are cooler than the Stanley Cup, but by doing so, you’d essentially be letting everyone else on the planet know every single opinion you have can be soundly ignored.

There are a number of factors that make Lord Stanley’s prize the G.O.A.T. that it is, like its impressive heft and the hand-etched names commemorating those who’ve earned it for posterity. However, it also has one requisite feature that instantly elevates any piece of honorary hardware to a higher echelon: the ability to drink out of it.

When you consider the customary way to celebrate a championship win is to immediately embark on a bit of a bender, being able to drag around a trophy that doubles as a de facto chalice is absolutely clutch. That’s exactly what Phil Mickelson got when he secured the Wanamaker Trophy at the PGA Championship last month, and earlier this week, he put it to good use by employing it as an incredibly impractical wine glass.

As if taking a sip from the massive cup wasn’t a big enough flex on its own, Lefty pulled a pretty baller move by opting to pop open some Black Magic, a Cabernet Sauvignon produced at Tor Wines that retails for a cool $450 a bottle.

According to The San Francisco Chronicle, that steep price tag didn’t stop thousands of people from reaching out to the winery in an attempt to track down one of the 3,000 bottles it produces each year. Owner Tor Kenward says he only had 15 cases remaining at his Napa Valley vineyard prior to Mickelson giving him a shoutout, and says that anyone who hasn’t been able to score one yet might have to wait until next year due to the overwhelming demand.