Phil Mickelson’s Agent Says Lefty Has Filed For A Release From PGA Tour To Play In First LIV Golf Event, Per Report 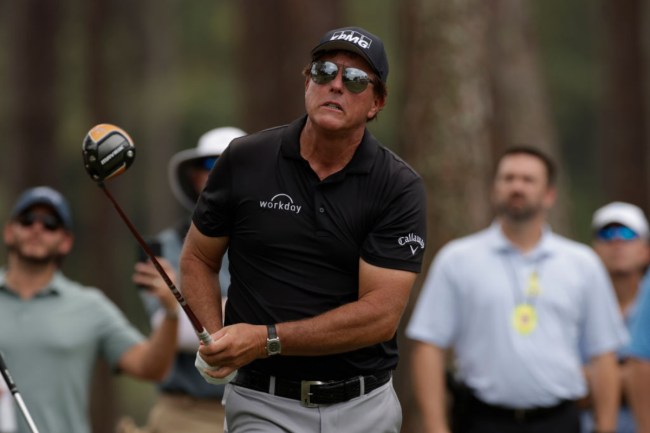 Phil Mickelson has been radio-silent since February after issuing an apology following his controversial comments about the Saudi-backed breakaway golf circuit. Nearly two full months later, we have an update about the six-time major winner.

Mickelson’s agent, Steve Loy, reportedly sent a statement to Golf Channel on Monday with a schedule update for his client.

Mickelson is registered for both the PGA Championship and U.S. Open, but perhaps the most notable update is that he has filed a request with the PGA Tour to play in the inaugural LIV Golf event in June. Monday was the deadline to make such a request to compete in the rival tour’s first event, which will take place in London from June 9-11.

The PGA Championship will be played May 19-22 while the U.S. Open is exactly four weeks later.

His desire to play in the first LIV Golf event shouldn’t come as a surprise.

In mid-February, Mickelson shared his very candid thoughts about LIV Golf with Alan Shipnuck of The Fire Pit Collective. Mickelson explained that he enlisted three other “top players” to pay for attorneys to write the tour’s operating agreement.

Mickelson also made it clear that he was intrigued with a breakaway tour, but also called the Saudis backing it “scary motherf–kers.” He also called the PGA Tour a “dictatorship” while bad-mouthing PGA Tour commissioner Jay Monahan.

Following extreme backlash and the loss of sponsors, Mickelson issued an apology for his comments while announcing he’d be stepping away from golf.

While Mickelson is registered the next two majors and has taken the next steps to play in the LIV Golf event, his agent said he “currently has no concrete plans” to actually play in any of the three events.

LIV Golf events will reportedly pay $20 million for the individual portion. Another $5 million purse will be handed out for the team portion, and a season-finale will pay out a $30 million purse.

The defending PGA Champion’s last PGA Tour start came at the Farmers Insurance Open in January of this year.