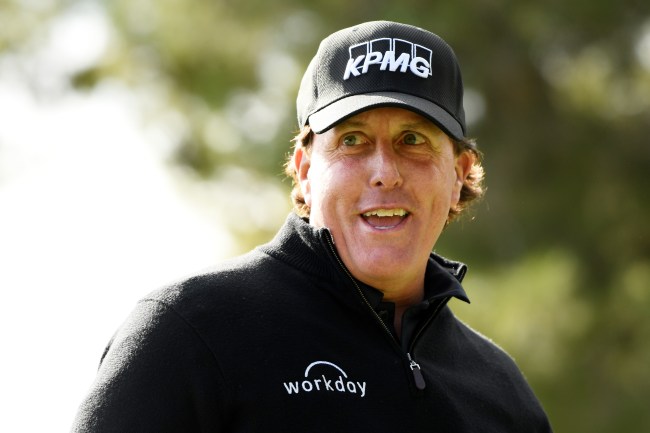 Phil Mickelson and other PGA golfers are getting prepared for this year’s first major title, The Masters, which tees off less than a week from now. And with the playing conditions at Augusta National being some of the toughest in golf, Lefty’s preparing himself for what lies ahead by getting his personal putting green mowed to an insanely fast speed of 16 on the stimpmeter; which is a device used to measure the speed of a putting green by applying a known force to a golf ball and measuring the distance traveled in feet. It’s nerdy stuff, basically.

What’s not nerdy is how Phil Mickelson drops a badass trick shot on us while putting on the practice green, where he ended up sinking two golf balls at the same time into the cup. Sure, Mickelson was trying to show us how quickly the ball rolls on the putting surface, but he ended up impressing us with the shot in the end. Take a look at the video below, which Phil posted to his Instagram account.

The video that Phil Mickelson posted comes a day after his longtime rival, Tiger Woods, appeared in a piece on GOLF TV’s Twitter account showing how the 14-time major champ is preparing for The Masters next week. In that particular video from GOLF TV, Woods said he sets his backyard putting green at 14 or 15 on the stimpmeter to prepare for the fast-moving greens at Augusta. I guess Phil just wanted to outdo Tiger in his own video?

Tiger on the Masters 💬

Whether it’s a good ol’ fashioned dick off between Tiger Woods and Phil Mickelson (again), or just a coincidence that they happened to appear in video putting on fast AF surfaces to prepare for The Masters, the fact that the ball is moving that fast is wild. And, even more impressive, is that Lefty was able to read the line perfectly enough to his two balls into the cup with that type of speedy greens. If he’s putting like that all next weekend, maybe Mickelson walks away with another green jacket come Sunday.