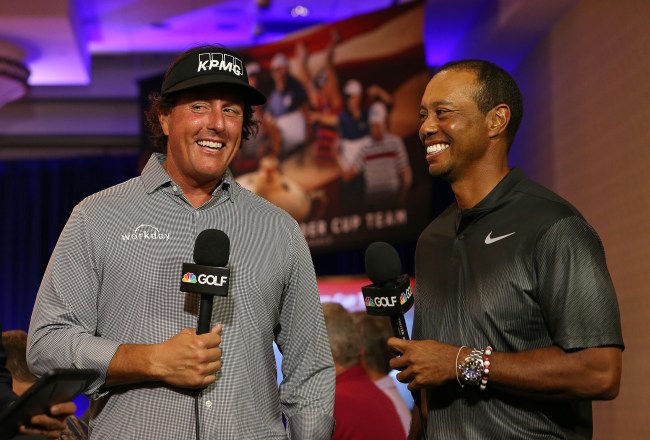 Phil Mickelson and Tiger Woods are just 10 days away from squaring off in a Pay-Per-View golf match that will pit two of the greatest and well-liked golfers of the past 25 years against one another, giving fans a unique competition to watch over Thanksgiving weekend — and giving the winner a cool $9 million. With the match set to air on November 23, there’s a ton of hype leading up to the event, with HBO Sports even doing a HBO 24/7 special to share some cool, behind-the-scenes stories about the two over the years.

As any of you fellow ’90s kids know, Tiger was the OG on the golf course between 1997 and about 2008, racking up 14 majors and becoming the Mike Jordan of the links thanks to his killer instinct. For a long time, Phil played the role lovable loser, playing to the crowd and being admired for his accessibility and insane trick shots on the course. Of course, he’s now won five majors himself, but he’s still shown a more down-to-earth personality than Woods ever has.

And a recent preview from the aforementioned HBO 24/7 series shows just how much Phil Mickelson likes to have fun on the golf course, especially if it’s at the expense of Woods, because Lefty once used Tony Romo to troll Tiger, hoping he would be able to get into his head during a Pro-Am in 2012 when Romo was Woods’ playing partner.

.@PhilMickelson knew using Romo would be the best way to troll @TigerWoods 😂

24/7 The Match: #TigervsPhil drops tonight at 10 PM on @hbo 🍿 pic.twitter.com/nfOIVClEqW

Here’s a quick transcription of the above video, via FTW.USAToday.

“His partner that week was Tony Romo. And that night, before the final round, Saturday was a big dinner that Jim Nantz put on. And I got seated next to Tony, and we had this great night, had a lot of fun. But I knew it would bother Tiger that I had dinner with his partner. Tony knew this would also bother him too, so he said to his caddie, ‘Don’t mention that we had dinner last night. Phil, just don’t even bring up the dinner.’

“We’re on the first tee. I tee off. Tiger tees off. And I wait before I walk off because I want a distance between me and Tony so I could say it loud enough. So as we’re walking off the first tee, I yell out, ‘Hey Tony, Tony! That was so much fun last night. I loved the dinner. That was the greatest!’

“And Tiger goes — looks right at him. And you see Tony say, ‘There were a lot of people there, and it was a really big deal, big function. It was a random seating.’”

The first part of the HBO 24/7 special airs tonight, so I’ve got a feeling there’s going to be plenty more gems to look forward to. I don’t care that the PPV is going to set my ass back about $20, because Phil Mickelson and Tiger Woods doing sh*t like this for 18 holes the day after Thanksgiving is the perfect entertainment to enjoy while housing leftovers. Let’s get it on, boys.