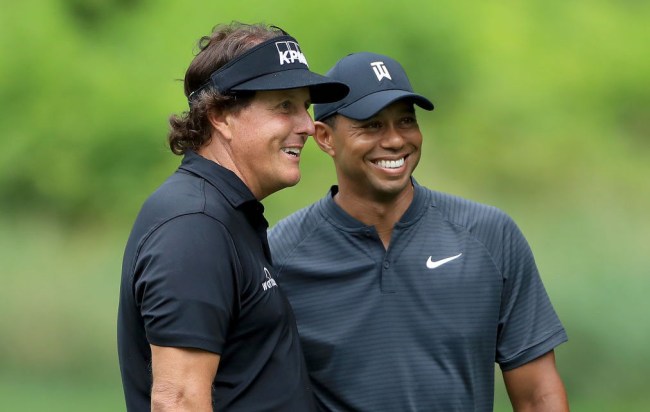 There aren’t many things more therapeutic than playing a round of golf with your buddies so you can shoot the shit while crushing beers and betting on as many things as possible.

As far as I’m concerned, there’s no point in jumping out of a plane when you can get the same adrenaline fix by wagering $5 on a 10-foot putt.

Talk about a fucking rush.

Based on the amount of pressure I have to deal with when I’m feeling brave enough to play for 10 bucks a hole, I can’t even imagine how much stress professional golfers have to deal with when there are millions of dollars on the line— which is exactly what Tiger Woods and Phil Mickelson will be doing when they play against each other next month.

The duo will be facing off in Vegas the day after Thanksgiving with $9 million up for grabs (although they sadly haven’t followed Patrick Reed’s suggestion to put their own money on the line).

If you want to get in on the action yourself, there are plenty of prop bets you can make to get some skin in the game but the event’s organizers have held off when it comes to saying how much it’s going to cost to watch the two of them face off— at least until now.

According to Bloomberg, you’ll have to shell out $19.99 for the privilege of watching the match, which will be broadcast on multiple platforms:

The Woods-Mickelson event will be available on AT&T’s two pay-TV services, DirecTV and U-verse, plus Turner’s new sports streaming service, B/R Live. Other cable and satellite operators distributing the event in the U.S. include Comcast, Charter, Cox, Verizon, and Altice.

The event will also be fairly unique as far as the format and production are concerned:

Turner executives say the broadcast will work differently than any other golf telecast, including microphones on the athletes and their caddies, side bets for charity, and no commercials.

A mic’d up Tiger? Here’s to hoping we get some fantastic moments like this one: