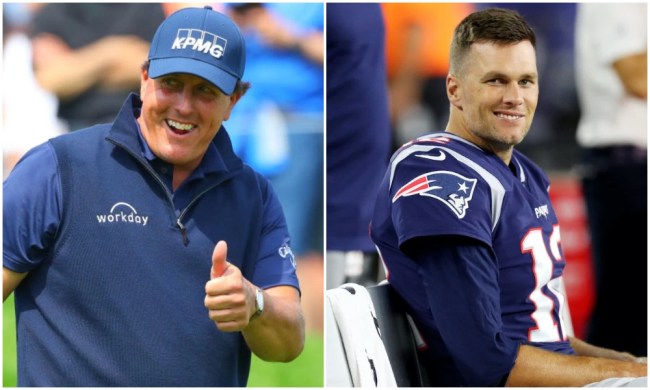 With Phil Mickelson and Tom Brady getting set to take on Tiger Woods and Peyton Manning in The Match: Champions for Charity later this month, we’ve started to hear both some trash talk and some pretty interesting stories from all four guys leading up to the event.

Mickelson joined The Dan Patrick Show on Monday and shared some information about the upcoming event. He also shared a funny story about catching some passes from Brady prior to a casual round at Augusta National a few years back.

Despite the fact that it was only a week or two prior to the Masters, Mickelson elected to catch some passes from Brady ahead of their round that morning. As Mickelson explains, when Tom Brady wants to toss the football around, especially at Augusta National, you have to say yes. It almost turned into a bad situation for Mickelson, however, thanks to Brady’s arm strength.

We’re 20 yards away from each other, it’s 7:15 in the morning and it’s half dark out. He’s throwing these balls so hard that I’m worried about busting a finger. I would only catch the second-half of the pass and if the ball wasn’t on my torso I couldn’t catch it. If it was off to the side I would end up missing it. I was so cautious about bending my fingers in a way that I don’t jam a finger. There were three times that a ball hit the palm of my hand and all three times I had a nerve shot go right up my arm.”

I guess that if Mickelson did actually break a finger, saying that it happened while catching passes from Brady at Augusta National wouldn’t be the worst story in the world, certainly better than jamming it in a door or something, but it still would have been a pretty tough look.