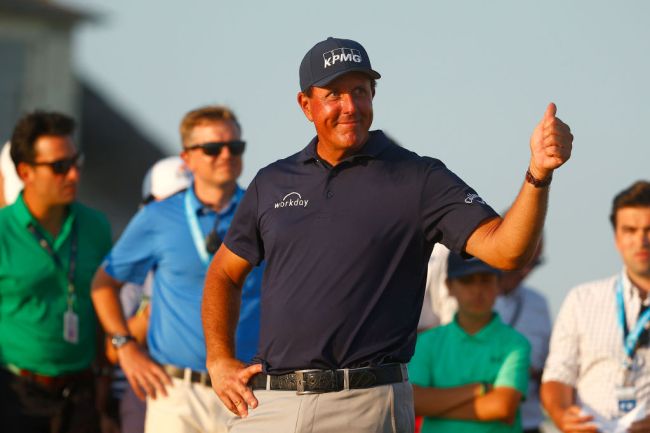 Phil Mickelson didn’t waste too much time following his historic PGA Championship win on Sunday to show some love to those sending him congratulations on Twitter.

Mickelson hasn’t been on Twitter all that long, but he’s quickly become one of the best follows in all of sports and his replies to random people on Sunday night is just another example of why.

Mickelson’s first reply on Twitter was to Tiger Woods, who explained that his performance this week was inspirational.

Thank you. I’m pulling for your quick return.

After that, the fun began with Mickelson replying to a huge number of fans and fellow PGA Tour players. These are some of his best tweets from Sunday night into Monday morning:

Elbowed him in the ribs. He backed off 😂

Some things are better demonstrated rather than spoken.

Not to burst your bubble, but I almost hit a lot of people 😂

Safe to say that Mickelson did not get much sleep on Sunday night seeing as how that last reply above came in at 4:42 AM EST. He’s even replying to people leading up to lunchtime on the east coast on Monday, the man simply can not put the phone down, and you have to respect it.

Mickelson’s win on Sunday came out of absolutely nowhere. The now six-time major champion wasn’t on anyone’s radar to have any sort of success at the Ocean Course at Kiawah, the longest course in major history, but golf being the strange game that it is gave us an all-time moment with his two-shot victory.

Mickelson ranked 115th in the world heading into the week, hadn’t won since February of 2019, and last won a major in 2013. This year alone, since September, Mickelson had missed six cuts and in the eight cuts he did make he didn’t finish inside the Top 20 once. None of that mattered this week, though, as the 50-year-old shocked the world and put on a masterclass for his second career PGA Championship win.