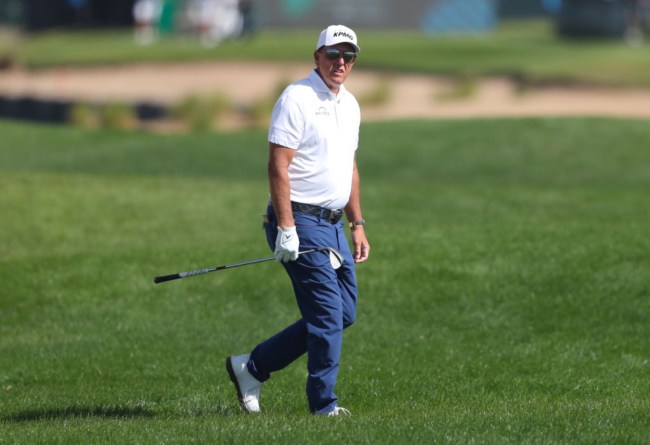 Phil Mickelson essentially went into hiding following his controversial comments about the Saudi-backed golf circuit and the PGA Tour. He’s left his hiding spot inevitably filled with strange coffee blends recently, however, as he’s been spotted playing golf in California.

Rumors of Phil Mickelson’s demise have been greatly exaggerated. He had plenty of speed yesterday at Rancho Santa Fe Golf Club. pic.twitter.com/N3NhqwEA6v

Earlier in the week, Mickelson’s agent released a statement explaining that he is registered for both the PGA Championship and U.S. Open. Mickelson has also filed a request with the PGA Tour to play in the inaugural LIV Golf event in June.

Mickelson’s agent did make a note in saying Mickelson “currently has no concrete plans” to actually play in any of the three events. Nevertheless, the statement and now this video points to a possible return to golf much sooner rather than later.

Back in February, Mickelson expressed his very candid thoughts about Saudi-backed LIV Golf with Alan Shipnuck of The Fire Pit Collective. Lefty explained that he enlisted three other “top players” to pay for attorneys to write the rival tour’s operating agreement.

Mickelson also made it clear that he was intrigued with a breakaway tour, but also called the Saudis backing it “scary motherf–kers.” He also went on to call the PGA Tour a “dictatorship” while bad-mouthing PGA Tour commissioner Jay Monahan.

The first LIV Golf event is scheduled to take place just outside London from June 9-11.

The attraction for playing in LIV Golf events are the purses as the tour will reportedly pay $20 million for the individual portion. Another $5 million purse will be handed out for the team portion, and a season-finale will pay out a $30 million purse.