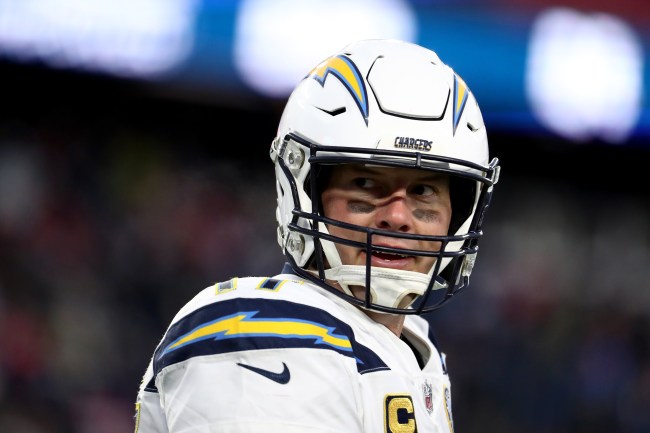 The couple, who began dating in middle school and got married after Rivers’ freshman year at North Carolina State, have children ranging from newborn to 16.

When asked on the Dan Patrick Show last year if he’s done having kids, Rivers responded: “No. Heck no. I hope not.” Rivers added that his wife, who has been pregnant a total of nearly seven years of her life, is “all-in” on keeping the little Rivers (or as I like to call them: streams) going.

According to Chargers Wire, Philip and Tiffany chose to keep the family in San Diego after the Chargers move to Los Angeles. Rivers makes the commute to work via a driver and a luxurious $200,000 SUV. Just one of the sacrifices he makes for his family, who claim that he spends every minute he can away from work with them.

As you can imagine, Twitter gobbled up the news of the 37-year-old Rivers having #9.

Last week, Chargers’ QB Philip and his wife Tiffany Rivers had their ninth child, Anna Rivers – two short of an entire offense. No word on whether they’ll go for it.

Philip Rivers audibles out of Max Protection every time https://t.co/eQQTQbPw3E

I wouldn’t trust Philip Rivers pulling out of a driveway… 👶🏻 pic.twitter.com/V1ZvrOLy74

This comment about Philip Rivers and his new kid 😂😂💀💀 pic.twitter.com/JX8p5jDQqS