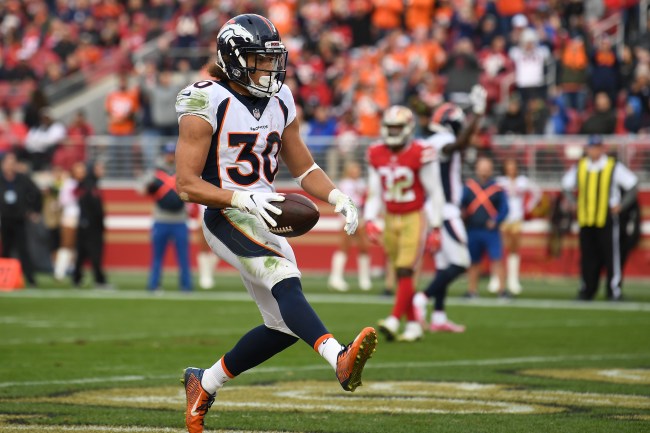 Phillip Lindsay of the Denver Broncos had a rookie season for the ages, especially considering he was an undrafted free-agent before the regular season began. Unfortunately, Lindsay’s 2018 campaign ended prematurely when, in Week 16, he injured his wrist against the Oakland Raiders, which landed him on IR, costing the running back a spot in the Pro Bowl game.

Now, as I reported a few weeks ago, for Phillip Lindsay to actually attend the Pro Bowl, even though he couldn’t play in the game, he would have had to pay his own way because he wasn’t part of the Denver Broncos’ active roster. While the dude did make $495,000 this year, that’s nothing when compared with some of the multimillionaires he plays with in the NFL. I mean, hell, the dude still lives with his parents to save money, so a trip to Orlando for the Pro Bowl on his own dime seemed out of the question.

While some Broncos’ fans tried to pay for Lindsay’s trip by starting a GoFundMe campaign, the NFL did something totally awesome and super unique to make sure the surprising rookie got to take in all the activities at the event. That’s because the league actually hired Phillip Lindsay as a social media correspondent, which means that the rookie will be heading to the Pro Bowl after all, even if it wasn’t the way he first expected to be there as a player in the game.

Talking to DenverBroncos.com about how he may be used at the Pro Bowl, as well as what it means to get the chance to at least be involved with the event in some capacity, here’s what Phillip Lindsay told the team’s site.

“I’m just going to be a social media correspondent, so I’ll be going around doing a lot of interviews with fans, with teammates and players,” Lindsay told DenverBroncos.com. “Just having a good time and making it fun for fans to get to see what it’s like to be in the Pro Bowl. It’s going to be — the whole entire time I’m there — about my experience at the Pro Bowl.”

Lindsay said his role will include attending the week’s practices and the Pro Bowl while in Orlando.

“The good thing is, I’ll be wandering around talking all kinds of crap and having fun,” Lindsay said. “I’m not going to be able to play in the game — which I wish I was — but being a correspondent sounds pretty good too, I’m not going to lie.”

This is awesome, so good for Phillip Lindsay to be able to be there, even if a lot of other players don’t think the Pro Bowl is a big deal. For an undrafted rookie, just being around the event has to be an honor, especially when considering he went from unable to play to working for the NFL and being a fan — all on the league’s dime.

We can all give the NFL a lot of crap for being behind the times a lot, but this is a unique way to reward a young, up-and-coming star, so kudos to them for finding a way to get Phillip Lindsay to the Pro Bowl.