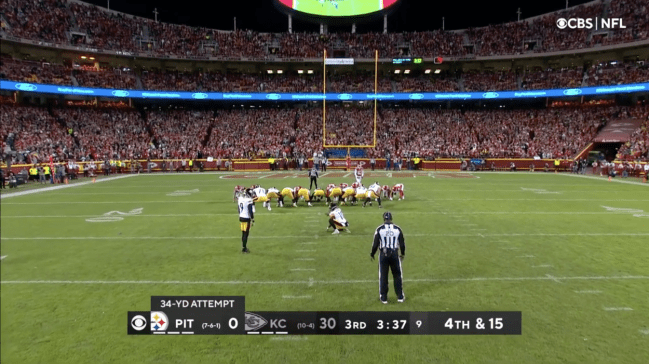 The Steelers did not have a very merry day after Christmas. Pittsburgh traveled to Kansas City over the holiday weekend and proceeded to get beat up and down the field.

Patrick Mahomes threw for 258 yards and three touchdowns without a pick and three Chiefs running backs combined for more than 100 yards rushing without a turnover. Meanwhile, Ben Roethlisberger was held under 200 yards passing, Najee Harris was kept out of the end zone and the Steelers turned the ball over three times.

It was ugly from start to finish and the visitors never stood a chance. Kansas City took a a 25-0 lead at halftime and went on to win the game by 26.

Things were so bad that Pittsburgh didn’t even find pay dirt until there was less than three minutes left in the game. And that came after kicking one of the saddest field goals of all-time just to get on the board.

In turn, Chris Boswell came out to kick, with his team down 30-0. He proceeded to make a 34-yard attempt.

As is with anything, people had all kinds of jokes:

We got a field goal now we only need 27 more points #Steelers pic.twitter.com/BdI3kggV83

Steelers kick a field goal down 30 to nothing pic.twitter.com/gfgDmhbICW

Love the field goal there to make it only a 27 point game. Steelers have them right where they want them going into the 4th

Didn't think anything about this Steelers season could be more depressing that tying the Lions, but kicking a field goal while down 30-0 might do it.

At that point, Chris Boswell may as well have walked out onto the field waving a white flag. Womp. Womp.