Indians Players Had Hilarious Reactions To A Drone Flying Over Wrigley Field, Delaying The Game 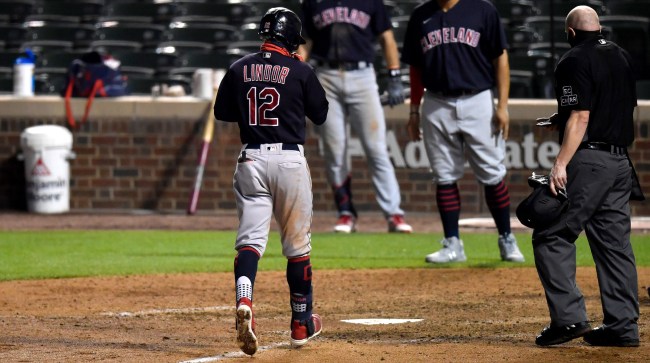 Seriously, is there anything left that could possibly happen in 2020 that would surprise us at this point? This is especially true in the world of sports where March Madness gets cancelled, college football seasons get cancelled then uncancelled, and Major League Baseball is playing an entire season consisting of just 60 games (or less in some teams’ cases).

So is it really all that surprising that during Wednesday night’s game between the Chicago Cubs and Cleveland Indians at Wrigley Field was delayed for seven minutes by, of all thnings, a drone?

2020: The year of drone delays in Major League Baseball.

Players being pulled off the field at Wrigley now as a drone appears.

As weird as that was, and it was weird, the reactions of Indians players Francisco Lindor and and Jose Ramirez more than made up for the bizarre game delay with some comical reactions, trying to take cover behind the umpires.

Another totally normal one in 2020. pic.twitter.com/ajMMABQPAd

Cubs catcher Willson Contreras, however, had a solid solution to the drone delay.

Luckily, no firearms were needed as the drone eventually came to a rest in left center field and the game was able to resume.

🚨DRONE DELAY🚨 Seriously? Someone has the balls to fly a drone INTO Wrigley Field and land it on the actual field? Unreal! @Cubs pic.twitter.com/mfRCLebcER

Hey, I tried telling you guys nothing good can come from the proliferation of drones.

Although, I suppose if any baseball game was going to get delayed by a drone, one between the two teams that met in the 2016 World Series was the perfect choice, right, Trevor Bauer?