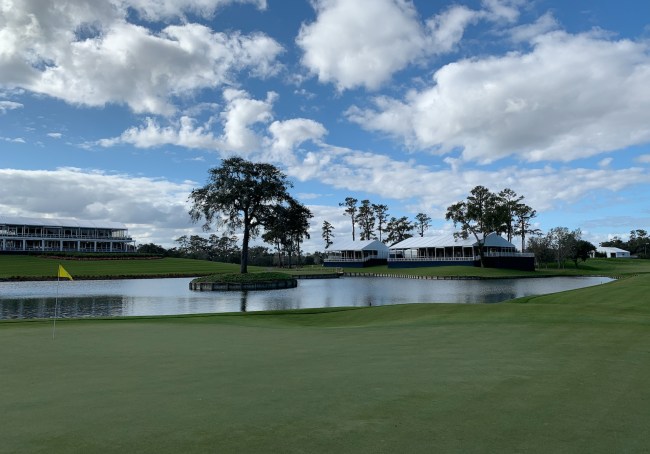 A look towards the 17th green from the 16th green. Photo via Mark Harris

Back in early January, I had the privilege of paying a visit to Ponte Vedra Beach and TPC Sawgrass for The Players media experience with the PGA Tour to get a glimpse at what the 2020 event will entail and witness first-hand the overall prestigiousness of the home of The Players.

On the final day of the trip, I was lucky enough to tee it up at the Stadium Course and from the moment I stepped on the property, it was a next-level experience.

We arrived at the 77,000 square foot clubhouse and were immediately greeted by staff informing us that they had us set up in the locker room. My playing partners and I made our way into the room and, casually, the staff had put nameplates on the lockers for us. Now, I’m sure this is pretty common practice for a lot of folks that get to play the course, but it was still a cool touch you’re not going to find at many other places.

Let’s have a day. pic.twitter.com/IEg9l9RR45

After grabbing a bite to eat, we made our way to the driving range to watch Rory McIlroy give a brief demo. There’s nothing quite like watching one of the world’s top ball-strikers hit a few shots ahead of your round; it’s both motivating and discouraging in relation to your own game.

Rory putting on a stripe show this morning. #TPCSawgrass pic.twitter.com/xf6CWb2DK6

Speaking of the driving range, I’m not exaggerating when I say that I could have sat there for a minimum of six hours just hitting flip wedges to one of the greens that mirrors the 17th green. So, for anyone that is going to play the course be sure to give yourself extra time on the range just to hit a few extra wedges to the green. The rest of the range is phenomenal as well, obviously. 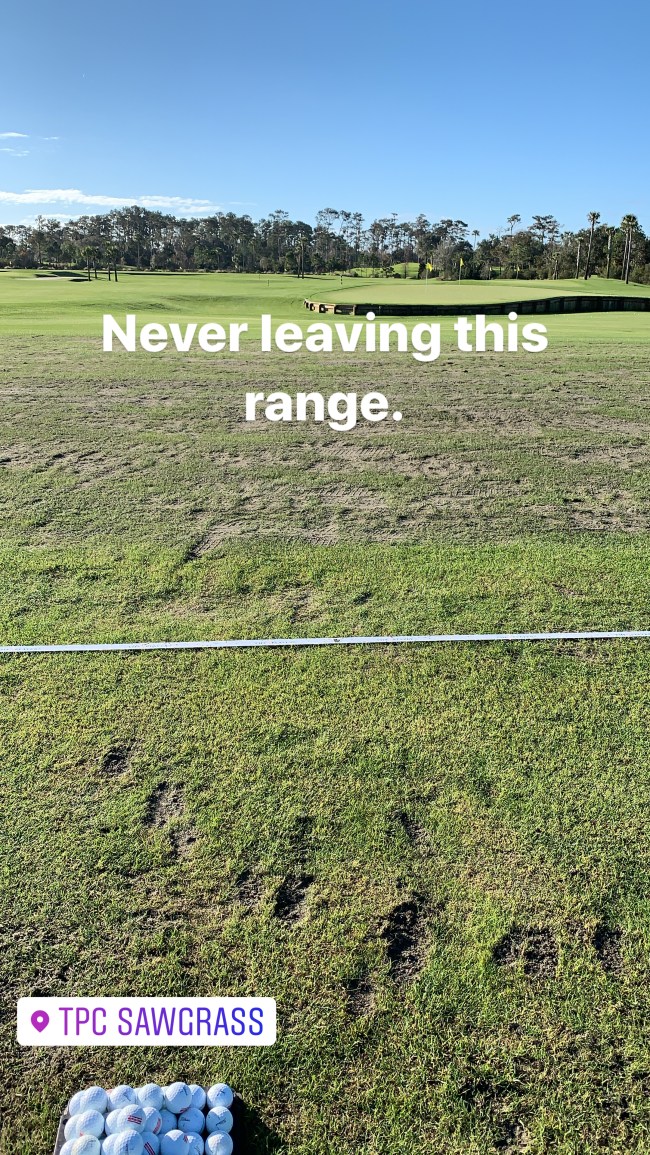 The driving range at TPC Sawgrass. Photo via Mark Harris.

While we were spoiled with the locker room experience and getting to watch McIlroy properly demonstrate how to stripe an 8-iron prior to making our way to the first tee, we were really spoiled due to the fact that we got to walk the course with caddies of our own.

PSA: if you’re ever on the fence about riding in a cart or walking with a caddie, assuming the weather is alright, always go with the caddie, especially at a place like TPC Sawgrass. Sure, you get some help with site lines and reading the greens, but the best part of the experience is the stories and joking around with these people that have seen anything and everything you can imagine on the property.

Alright, Now Onto The Round Itself

I’m not about to go on a hole-by-hole breakdown, but the journey both literally and figuratively began at the first.

We most definitely did not play the tips, so my caddie handed me the 3-wood on the tee of the short Par 4. The real trouble is to the right, so I elected to block my tee shot way left (I’m left-handed) into the pine trees. Funny enough, I had a pretty large window and a not so bad lie to the green, just a flip wedge, but I then decided to chunk it into the greenside bunker left of the green, which was death seeing as how the pin was tucked in the front and as far left as possible.

With about two feet to work with, fresh off of chunking a flip wedge on the nicest course I’ve ever played on and still fighting the nerves, I decided to show the group just how sharp my lob wedge knife was and hit one of the best bunker shots of my life and walked away with a bogey after knocking in about a four-footer.

I took advantage of us playing the up tees on the Par 5 second and settled into the round with what was one of four birdies on the day. Not to brag or anything, but as someone who lives in Manhattan and literally only gets to play golf either on a simulator or whenever I actually go on a trip like this, four birdies aren’t too bad.

While most people would probably say No. 4 or No. 6 are their favorite holes on the front nine at TPC Sawgrass, my vote goes to the Par 5 ninth. While it’s not the most challenging hole off of the tee, the second shot is when the decision making comes into play with a bunker all down the left side of the fairway and a large tree guarding the green and the flag if it’s tucked in the left.

The pin was way up front for us so we got off easy, but nevertheless, No. 9 is very sneakily one of the best holes out there.

The ninth at Sawgrass is too pure. pic.twitter.com/vVV5PgVPa6

After scarfing down a chicken caesar wrap at the turn in about three bites, it was time to make the turn. You’d maybe think that once you get to the 10th tee the thought of No. 17 would be creeping into mind, but after turning at 4-over I was locked in on trying to break 80.

Things got tense quick thanks to a a snap-hook off the tee and some tree trouble and I walked away with a double bogey. But, just like I did on the Par 5 second, I picked up another birdie on the Par 5 11th after pulling off yet another bunker shot I surprised myself with.

I pulled another tee shot and gouged my approach shot out of an awful lie into the lengthy bunker along the right side of the fairway bordering the water. I was left with an awkward 50-yard bunker shot and stuck it to 3-feet, again, shocking myself with the nice touch.

This may be another surprising pick of favorite holes on the back-nine, but the Par 3 13th was a pretty special hole. We only played it from around 155 yards, but that green’s undulations offer a real challenge if you don’t find the right tier off the tee. It’s a three-putt waiting to happen and happen it did for yours truly.

Related: We Chatted With Rory McIlroy About What Makes TPC Sawgrass And The Players Feel So Different During His First Trip Back Since Last Year’s Win

Fast-forward to the closing stretch and I was 7-over standing on the 16th tee. I found the fairway and had around 215 yards to the pin, which was on the far-right side of the green and looked like it was nearly floating in the water from my vantage point. I naturally tugged a 4-iron so far left it actually hit off of the grandstand 30 yards left of the green (scummy move, I know) but eventually walked away with a two-putt par.

The sixteenth hole, in my opinion anyway, is the best hole on the property. From the subtle undulations in the fairway, the risk-reward of going for it, the tree guarding the left side of the green and water right and the large green, it’s just a great golf hole.

After you walk about 100 yards up the fairway of the 16th your eyes can’t help but wander over to the 17th to the right. You’re playing the 16th hole, but you’re already thinking about the 17th, it’s unavoidable.

The view from 16 green over to 17 and the grandstands (pictured above) is astounding. You may not realize just how close the 16th green is to the 17th tee, it’s literally about a 15-second walk. You’re truly engulfed in the stadium setting from 16 green until you step off of the 17th green.

So, the moment had arrived, I’m standing on the 17th tee at Sawgrass at 7-over with a legitimate shot at breaking 80, which is all I was after that day. I had already had a chance to hit a shot under the lights the night before in front of 40 people or so as part of The Players Club experience the night before and hit the green with a random pitching wedge.

The pin the night before was on the front, the pin today was tucked in the back-right corner where nobody in their right mind would take aim at.

I told my caddie and playing partners I was going to take an aggressive line and it turns out my aggressive line meant catching a pitching wedge fat and coming up a solid 10 yards short of the green. The quest for breaking 80 was at the bottom of the lake as was my self-respect.

I managed to hit the middle of the green with my second attempt and two-putted for what was my third double-bogey of the afternoon.

I decided to put a little extra into my drive on the 18th and only had a wedge in, but the water ball on 17 was the story of the day. I walked away with a par at the last for an 82 on the day.

‘Did you hit the green on 17?’ is the first question every single person you know will ask you after the round, a dozen people told me that prior to the round that day and they were right. I get it, it’s arguably the most iconic hole on the planet, over 30,000 people sit there and watch pros take aim during The Players, but it should go without saying that the other 17 holes out at TPC Sawgrass make up quite the ride.

Remember, my round came in early January where the overseeded rye was probably only around 85% grown in, but the place was impeccable. I can’t stress enough that if you can get on this place, do it, no matter the time of the year.

I’m not going to lie either, going into the round I didn’t really know what to expect when it comes to just how good this track was going to be. I hadn’t played a course anywhere close to the pedigree of TPC Sawgrass, but I have been to the Masters a handful of times as well as The Open at Carnoustie.

For anyone that’s ever been to Augusta National, that’s the course you hold to the highest comparable standard to any other prestigious golf course on the planet, it’s just how it is whether it’s fair or not.

With that being said, I can confidently and honestly tell you that TPC Sawgrass lives up to every bit of hype you can imagine. From the moment you step on the property to the moment you leave, it’s as top-notch as it gets. It’s no wonder that Rory McIlroy literally compared it to Augusta.

The practice areas, the people, the caddie experience, the vibe both inside and outside of the clubhouse, and anything else you can possibly imagine, it is all beyond elite.

What an experience at TPC Sawgrass. Incredible course, insanely awesome caddies, the hospitality was next-level and my playing partners made it above and beyond.

A huge, massive thank you to the PGA Tour, The Players, everyone at TPC Sawgrass and Sawgrass Marriott for thinking of us and for allowing us to tee it up at the Stadium Course.