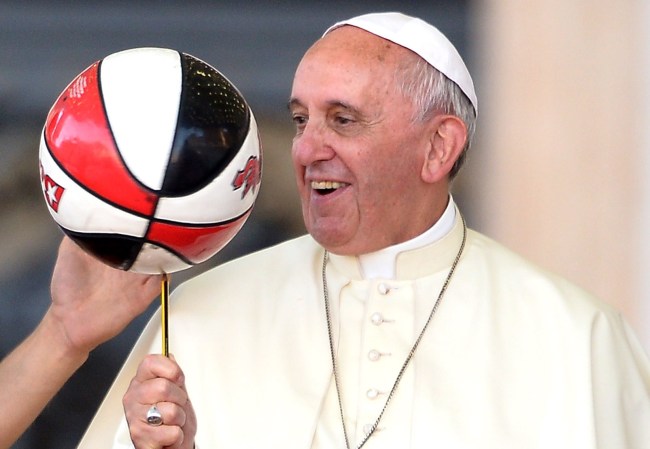 In 2016, HBO debuted The Young Pope, a fairly bizarre series starring Jude Law as the chain-smoking head of the Catholic Church. While the show never really caught on with viewers, it randomly became all the rage among a certain subset of Twitter users who created countless memes—including what was one of my favorite pictures on the internet prior to the discovery of the photo of Pope Francis I opted to use for this article’s featured image.

This remains my favorite picture in the history of the internet and will likely never be surpassed while I am on this Earth pic.twitter.com/JesOOyNDOC

Ever since Pope Francis ascended to the papacy in 2013 after his predecessor became the first person to prematurely vacate the role in over 600 years, the man who once worked as a bouncer in his native Argentina has voiced his support for a number of fairly progressive policies (at least when compared to those instituted by those he came before him). As a result, many people have dubbed him “The Cool Pope,” and on Monday, he gained a few points in my book when he sat down with a number of NBA players and representatives who made a trip to the Vatican after the league recently began to advocate for a number of social issues.

#PopeFrancis met today with reps of the NBA Players Association to talk about their efforts to promote racial equality, social justice & to feed the poor. (📷 Vatican Media) pic.twitter.com/fGhoMJzQPl

The push was largely sparked by the wave of protests that saw people around the United States take to the streets prior to the start of the summer to call attention to police brutality and racial inequality, which resulted in some players debating whether or not they would enter the bubble in Orlando due to the political climate at the time. This consequently led to Adam Silver announcing efforts to call awareness to the problems at hand by taking steps to promote social justice in the form of custom jerseys and messages on the courts (although it appears they’ll be less front and center next season).

According to ESPN, Francis sat down with five players, including Kyle Korver and Sterling Brown (the first is a member of the Bucks team that decided to boycott a playoff game while the latter was awarded $750,000 after being tased by police during his time in Milwaukee) in addition to two union reps to gain a better understanding of how the league is planning on continuing its fight to call attention to the causes it’s getting behind.

As of this writing, details concerning the specifics of the discussion are scarce but those in attendance are expected to speak with the media to shed some more light on what went down before heading back to America on Tuesday.