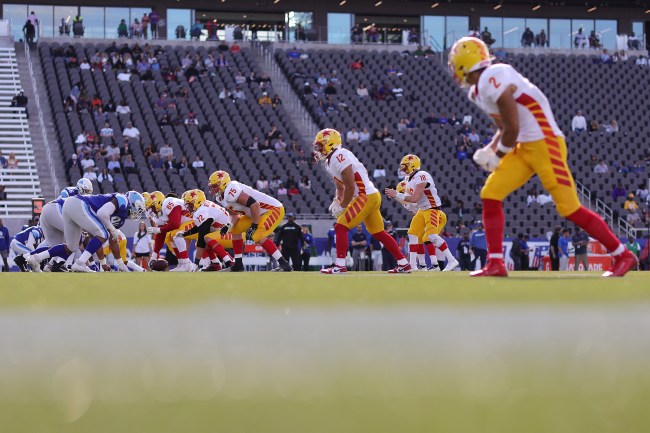 The USFL season is officially underway.

The professional league is back after a three-decade break, and fans are overjoyed about the fact that they can now watch football all year long.

On Sunday, we got to witness the season opener for the New Orleans Breakers and the Philadelphia Stars. The first matchup in the history of each organization, the two teams have been battling it out in a back-and-forth contest.

Midway through the third quarter, the Stars lead by a score of 10-9.

The game has already brought a pair of exciting defensive and special teams plays by the Breakers.

One was a blocked punt that briefly gave the Breakers a 9-7 lead in the second quarter.

The next was a pick-six for the organization’s first ever touchdown. Linebacker Vontae Diggs stepped in front of a pass and took it to the house.

.@Diggsy13 breaking through for our first-ever TD!! 🌊

While the play was exciting in its own right, one POV camera angle makes it seem like you’re making the pick yourself. Check it out.

You can see Diggs read the eyes of the quarterback before reacting. He swiftly breaks on the ball, tipping it up to himself before securing it.

Diggs books it down the sidelines and into the endzone for the score.

Hopefully this is an angle that continues to be used throughout the league. Watching big plays through the eyes of the player is a great way to get fans involved.

And this touchdown return was so ridiculously cool.