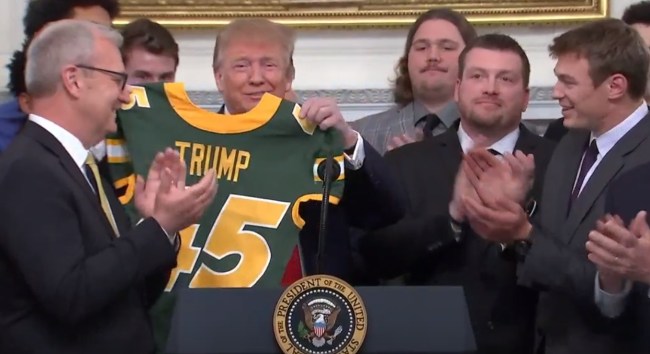 President Donald Trump celebrated the Clemson Tigers in January with a robust spread of fast food from McDonald’s, Wendy’s and Burger King. On Monday, Trump welcomed the North Dakota State University football team to the White House and treated them to an even better fast food buffet.

The North Dakota State University Bison were undefeated in 2018 and won the NCAA Division I Football Subdivision Championship by beating Eastern Washington by the score of 38-24. NDSU, which won its seventh national title in eight years, was invited to the White House to celebrate their most recent championship and treated to a smorgasbord of fast food.

With the shutdown over, it seems as though the President wants to make the fast food buffet a new White House tradition. “We like American companies,” Trump said of the fast food.

On the menu for the North Dakota State Bisons: Chick-fil-A and McDonald's. They're the latest championship team to visit Trump at the White House. Photo by WH pool reporter @HansNichols pic.twitter.com/5Yu5MZUhor

However, Trump’s administration appears to have made a major faux pas by not serving Chick-fil-A waffle fries.

For those asking, we did not spot Chick-Fil-A waffle fries, only a table with cups of McDonald's fries. pic.twitter.com/7fVpol2O8P

Trump was criticized by many, including Michael Strahan and Reggie Bush, for the fast food meal for the Clemson Tigers.

Bisons’ quarterback Easton Stick, who threw five touchdowns in the championship game, flew from Indianapolis, Indiana, where the NFL combines are being held at Lucas Oil Stadium, to Washington D.C. so he could meet the President and be honored with his teammates. At the combine, Stick is garnering much praise for his athleticism.

His 4.05 short shuttle is 4th best in the same time period.

It shows in games, too.

President Trump said Stick is going to be a rich man and looks like Tom Brady. “He’s got the whole package. Somebody better draft him,” Trump said of Stick.” Trump told Stick, “He’s gonna be a rich guy, don’t worry about the money, just do a great job. I think you’re gonna be fantastic.”

Trump then read the accomplishments of Bisons wide receiver Darrius Shepherd, who was named Most Valuable Player in North Dakota State’s championship victory. “Not bad,” Trump told Darrius on his two touchdowns, including a 78-yard reception, in the championship game. Shepherd, who is also vying to make it to the NFL, said the White House visit is “something we’ll never forget.”

But will anybody be as excited for the fast food at the White House as much as Clemson’s Matt Bockhorst was?