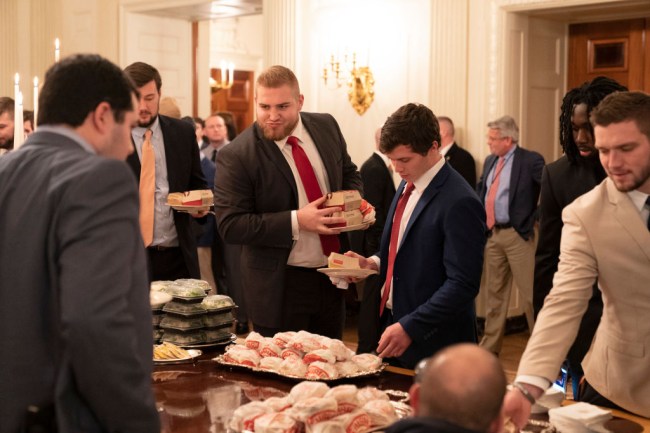 Last week, Clemson made Alabama look mortal for the first time in a while after they absolutely destroyed the Crimson Tide in the College Football Playoff National Championship.

Over the weekend, Donald Trump revealed he’d decided to buck his tradition of bucking tradition when he announced he’d invited the Tigers to visit the White House in honor of their championship.

I look forward to hosting, right out of the great State of South Carolina, the 2019 NCAA Football Champion Clemson Tigers at the White House on Monday, January 14th. What a game, what a coach, what a team!

Ahead of their arrival on Monday night, Trump spoke with the press and announced he had a very special meal in store for the team: a bunch of fast food.

At the time, it seemed like a curious decision when you consider the culinary resources the White House has at its disposal. However, it turns out Trump decided to take this route because he had to pay for the meal out of pocket thanks to the government shutdown.

News: Due to the government shutdown, President Trump is personally paying for the meals that will be provided to the Clemson team during their celebration tonight, CNN has learned. Trump said he's serving "McDonald's, Wendy's and Burger King's with some pizza." WH statement: pic.twitter.com/SAae2dSuMr

Plenty of people were quick to call him out for being a cheapskate and argued someone whose favorite hobby is telling people how much money he has might have been able to afford something a little classier.

However, politics aside, I think most people would agree there was something absolutely and objectively hilarious about the contrast between the ornateness of the room the reception was held in and the food that was being served inside it.

Here’s a video I shot of President Trump showing off his 300 hamburgers. pic.twitter.com/P06S6I5w07

Trump might have caught heat for going the fast food route but most of Clemson’s players didn’t seem to mind— especially offensive guard Mat Bockhorst, who quickly went viral after someone posted a photo of him crushing the buffet.

“Two Big Macs? Sheeeeeit don’t mind if I do!” pic.twitter.com/RNsMYToGZ2

NCAA made billions off me and all I got was CTE and a Big Mac pic.twitter.com/IMg2oaMEFP

The absolute unit is listed at 311 pounds so it’s not exactly shocking that he’d go H.A.M. in a situation like this. After he became aware of his sudden internet fame, he embraced his brief moment in the spotlight with some A+ responses to the reactions.

I mean you’re not just gonna NOT eat the Big Macs stacked in a pile right? https://t.co/nsWC0ptCvi

And a scholarship, a stipend, an education, a head coach that cares and last but not least, a National Championship Ring 👍🏻 Goodnight Twitter https://t.co/xkkFIg8Dp6