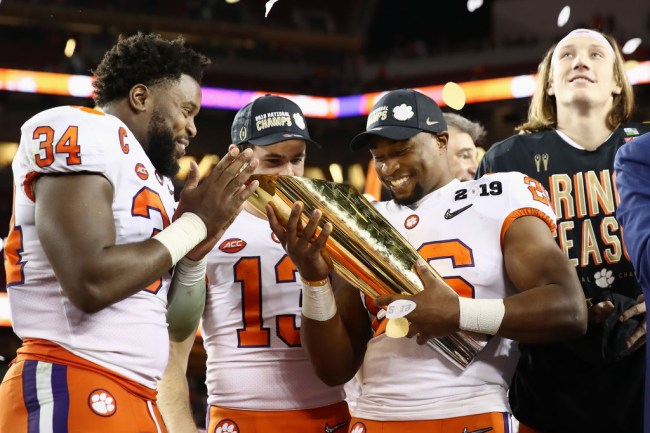 Last week, the prophecy of Trevor Lawrence’s girlfriend was fulfilled when Clemson absolutely thrashed Alabama in the College Football Playoff National Championship by a final score of 44-16.

It was a humbling loss for the Crimson Tide and one hell of a win for the Tigers, who look poised to continue to dominate the college football world in the next couple of years thanks in no small part to Lawrence and his impeccable hair.

Over the weekend, Donald Trump revealed he’d extended an invite to the team to visit the White House while singing its praises.

I look forward to hosting, right out of the great State of South Carolina, the 2019 NCAA Football Champion Clemson Tigers at the White House on Monday, January 14th. What a game, what a coach, what a team!

This normally wouldn’t be much of a story if it wasn’t for the fact that Trump has repeatedly broken tradition by not inviting other championship teams to the White House— including the time he “rescinded” the Warriors’ invitation after the players revealed they had no interest in making the trek to Washington, D.C. in 2017.

As you may remember, LeBron James was a bit critical of his decision.

Trump also decided to disinvite the Philidelphia Eagles following their Super Bowl victory last year after some players decided they would rather do literally anything else.

Trump just cancelled the White House event for the Super Bowl champion Philadelphia Eagles because some of the players weren't going to come. pic.twitter.com/lzh4FxF1IT

However, it appears Clemson has managed to escape the fate of the many teams to come before them and (at least at the time of this writing) they’re scheduled to visit the White House on Monday night.

Prior to their visit, Trump revealed he had a special meal planned for the Tigers: a bunch of fast food.

While I’m sure some Clemson players are down for a cheat day, it kind of seems like Trump might be using their visit as an excuse to chow down on his favorite foods given his past history and his infamously terrible diet.

As you’d expect, people had some jokes— including more than a few Ricky Bobby references.

Trump learned everything about what people from the south like to eat from Talladega Nights:The Ballad of Ricky Bobby https://t.co/Mlpbj2Jjsf

When Trump says Clemson will be getting McDonald's, Wendy's, Burger King and Pizza when Death Valley Donuts has made it abundantly clear what their favorite food is. pic.twitter.com/Yz8w6vIRC5

At least he isn’t serving them well-done steak with a side of ketchup.