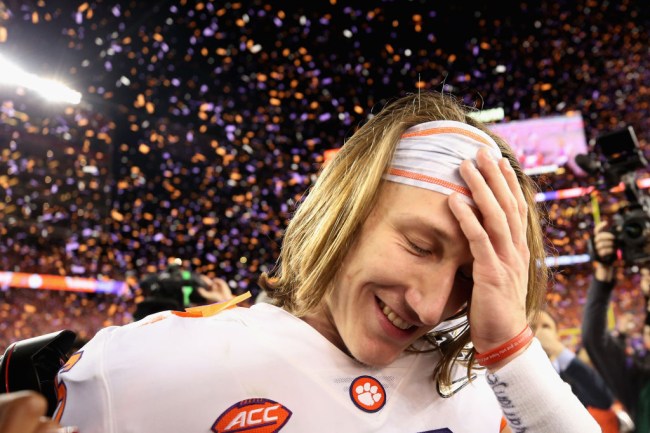 Clemson QB Trevor Lawrence became an instant national treasure after the 19-year-old threw for 347 yards and three touchdowns in a stunning 44-16 drubbing of the formidable Alabama Crimson Tide. Lawrence became the the first true freshman to win a National Championship since 1985, adding Offensive MVP to his resume in the process. Maybe he’s born with it. Maybe it’s Maybelline.

In two playoff games this season, the 5-star QB from Johnson City, Tennessee has thrown for 741 passing yards and 6 TD passes. After the National Championship victory, former Cowboys VP of Player Personnel Gil Grant dubbed the 19-year-old “the best true freshman QB I’ve ever seen” and instructed NFL teams to make as many trades for 2021 picks as they could. The good news for Clemson is that Lawrence will need to spend at least the next two seasons with the Tigers before making the jump to the pros.

The moment Lawrence becomes eligible, NFL coaches will be flocking to the future Pantene Pro-V model like basic chicks to Sweetgreen.

Lawrence, who went to prom a mere 10 months ago, became an instant celebrity on the world wide web last night for his exceptional play and more exceptional follicles.

There were many facets to Trevor Lawrence Twitter last night, all hilarious in their own right.

trevor lawrence looks like if an O.A.R. song was a quarterback

Trevor Lawrence is Jeff Spicoli in a football jersey. pic.twitter.com/YHs1yybOOR

Gonna post this magnificent image every time something happens involving Trevor Lawrence. So keep an eye out for that for the next year or three years or decade pic.twitter.com/65QwcjilNc

Trevor Lawrence when he leaves #Clemson in 2 yrs. #CFBChampionship pic.twitter.com/c9cezolADn

Trevor Lawrence dorm room when he gets back on campus pic.twitter.com/DBkXfW6xF3

Live look at Trevor Lawrence in the club with every Alabama cousin/wife tonight pic.twitter.com/jGycCXpgmp

Let’s not crown this dude Uncle Rico yet, but I think it’s safe to say that Trevor Lawerence isn’t leaving the spotlight anytime soon. Let’s just hope the light doesn’t fry that lettuce.