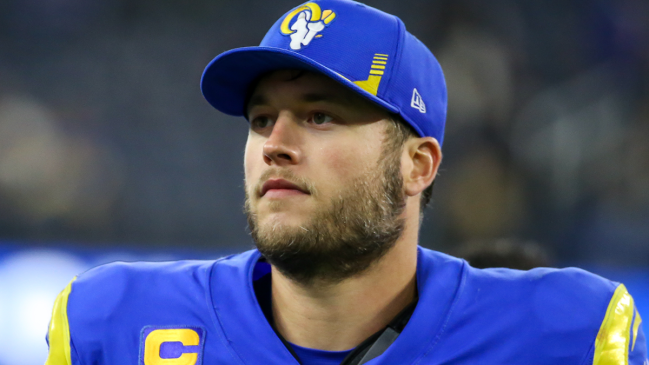 The NFL season is sadly filled with regular reminders highlighting just how dangerous football can be, as it’s hard for a single game to go by without at least one player needing medical attention and almost as rare for a week to go by without seeing someone succumb to a fairly debilitating injury.

While the sport has come a long way in regard to prioritizing player safety, the nature of football means every single player who steps onto the field knows there’s a chance they might not be able to walk off of it under their own power; when you’re in the NFL, suffering a physical setback is virtually always a matter of “if”, not “when.”

Matthew Stafford knows that all too well. Over the course of a 14-year career with the Lions and Rams, the veteran quarterback has had to overcome a separated shoulder, broken tailbone, lingering elbow issues, and the litany of other injuries he’s fallen victim to over that span.

Like far too many football players, Stafford has also dealt with his fair share of concussions and other neurological issues. That includes the worrying trauma that recently brought his current campaign to a premature end after Los Angeles understandably decided to shut the QB down for the remainder of the season after he experienced numbness in both of his legs stemming from a hit during a game against the Saints that led to what has been officially diagnosed as a spinal cord contusion.

The timeline for Stafford’s recovery is still very much up in the air. However, based on what an orthopedic surgeon who spent 17 years lending his services to various NFL teams had to say about the development, there’s a chance the season-ending injury could also be a career-ending one.

Dr. David J. Chao (who you may know better as “Pro Football Doc”) recently broke down the fairly grim reality Stafford is currently facing and, well, it’s not exactly the most optimistic analysis you’ll ever encounter.

Chao stressed this particular ailment is not something that can be taken lightly. While there are a few procedures that could theoretically address it, he suggested Stafford will have to do some serious thinking about whether he wants to undergo yet another surgery with his 35th birthday just a couple of months away, saying:

“You cannot mess around with the spinal cord. Any small risk of permanent damage needs to be avoided. This is why he’s being shut down for the season.

What the medical staff has to do is find out why it happened—was there instability at one segment, was there a disc, was there a canal narrowing—what is it and how do you correct it and prevent it, which might mean surgery.

It seems Matthew Stafford and his family will have a choice this offseason: either do something to correct the risk of further spinal cord contusion and potentially permanent damage…or decide to hang it up after 14 seasons and a Super Bowl ring.”

Stafford’s wife Kelly has been incredibly vocal about the psychological toll that comes with watching her husband take a beating on a regular basis, and while there’s no way to know how things will unfold, it seems like the Rams and their fans may want to start bracing themselves for some potentially devastating news.