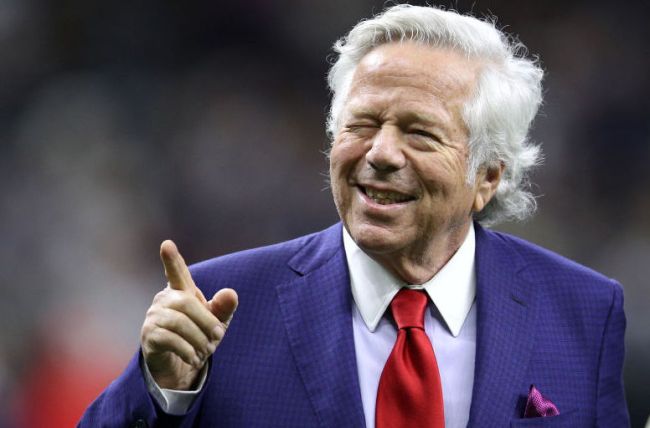 In 1994, Robert Kraft purchased the New England Patriots for $172 million. It turned out to be a pretty solid investment on his part, as the franchise is valued at upwards of $4 billion over 25 years later, which makes up a solid chunk of the estimated $6.6 billion net worth the owner is currently rocking.

Money might not be able to buy happiness but one of the nice parts of being really, really, really, ridiculously rich is that you rarely have to check your bank account balance before making purchases that are at the very least capable of making life a bit less miserable, like the two massive waterfront properties he owns in Cape Cod and Palm Beach where he resides when he’s not occupying his sprawling compound outside of Boston.

Kraft dropped almost $20 million on his home in Florida a decade ago, which is located around 20 miles from the massage parlor that was thrust into the news early last year after Kraft was one of 26 men charged with soliciting various sex acts from employees at the Orchids of Asia Day Spa, which he allegedly visited to, um, have some stress relieved on multiple occasions—including the afternoon before the Patriots took on the Chiefs in the AFC Championship.

Police claimed they had a smoking gun in the form of graphic surveillance footage featuring Kraft on the receiving end of some particularly illegal services. However, the owner used some of his fortune to assemble a formidable legal team to prevent the video from being used against him after pleading not guilty and declining a fairly unconventional deal that would’ve allowed him to largely avoid punishment if he copped to the two misdemeanors against him.

It came as no surprise that multiple media outlets attempted to obtain the evidence in question but saw their requests denied, and a few months after the news broke, a judge announced it couldn’t be used against him at trial after ruling the people behind the sting illegally violated his privacy by failing to follow the proper procedures while conducting it.

Prosecutors initially appealed the decision, but according to ESPN, they’ve had second thoughts due to the potential long-term impact a higher court ruling against the methods employed in the operation could have on future cases. As a result, all signs are pointing to the charges being dropped, as the case hinged almost entirely on the footage.

While the Worldwide Leader broke the news, I would be remiss if I didn’t give credit where credit is due to The New York Post for continuing to dominate its historically unparalleled headline game.

Robert Kraft likely to get off in Florida massage parlor case https://t.co/dGxdArdLQU pic.twitter.com/9cG1mjL6hp