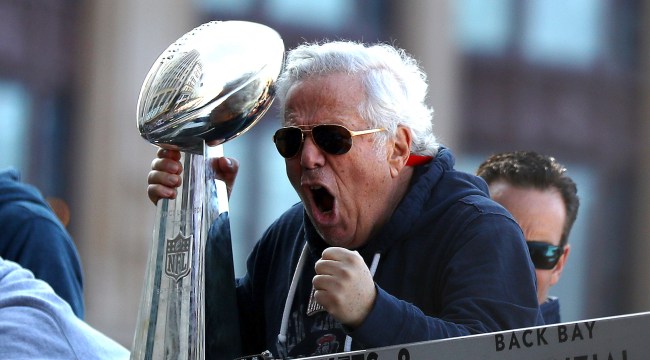 Cue DJ Khaled’s “All I Do Is Win” because the judge in Robert Kraft’s massage parlor prostitution case has ruled that the graphic video obtained by police cannot be used in court.

Last month, during a hearing at the Palm Beach County Courthouse, Judge Leonard Hanser asked all parties to submit proposed orders over whether the surveillance video of Kraft would be released to the public or not. ESPN and other publications had been actively attempting to force the court to release the video, but now the chances of them ever seeing it and publishing it have dropped to almost zero.

In their defense, Kraft’s legal team called the video “basically pornography” and didn’t want it falling into the hands of the news media because it would violate the Patriots’ owner’s right to privacy.

Now, not only will the media not see the video, neither will anyone in a courtroom. That’s because on Monday a judge ruled that the video taken of Kraft inside the Orchids of Asia Day Spa was obtained illegally.

According to TMZ Sports…

The judge said police didn’t minimize their recordings — meaning they didn’t do enough to protect people who were inside the spa getting perfectly legal massages.

The judge also said the police didn’t do enough to minimize the impact of recording female customers inside the spa.

Detectives who testified in recent weeks said their only direction while monitoring the cameras was to “look for illegal activity.” The judge said that’s not nearly specific enough … they needed to have written guidelines as to when to turn the cameras on and off.

“The fact that some totally innocent women and men had their entire lawful time spent in a massage room fully recorded and viewed intermittently by a detective-monitor is unacceptable,” said the judge.

T.J. Quinn of ESPN reports that with this new development, Kraft’s lawyers are expected to file a motion to dismiss the entire case, possibly as soon as Tuesday, based on a lack of evidence.

Expect Kraft's attorneys to file a motion to dismiss based on lack of evidence, probably tomorrow. The state can either dismiss charges, appeal the decision or take it to court. But so far they haven't cited any evidence other than the video surveillance.

So, unless the rumors of someone trying to illegally sell the video turn out to be true and someone bites, this will probably be the last we’ll be hearing about it.