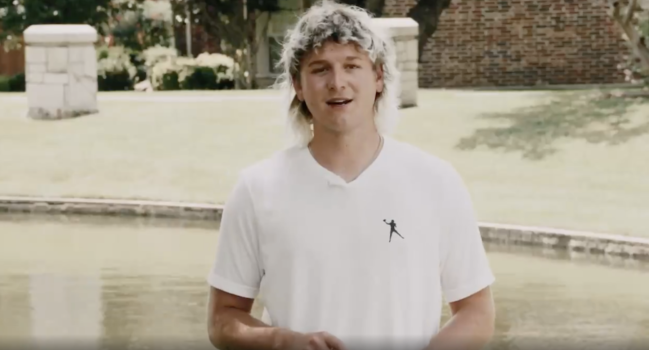 Ohio State freshman quarterback Quinn Ewers hasn’t arrived on campus in Columbus but he is already cashing in on NIL. The newly reclassified No. 1 overall recruit released a 45-second advertisement for Texas-based drink company Holy Kombucha.

Ewers, who rocks a bleached blonde mullet that would make Hulk Hogan jealous, is the highest-rated college football prospect in history. The 18-year-old shares the title with Trevor Lawrence — who went on to be drafted No. 1 in the NFL Draft — and was originally scheduled to graduate in 2022.

However, when the NCAA allowed players to profit from their Names, Images and Likenesses on July 1, Ewers saw dollar signs. Up to $1 million in dollar signs, no less.

Why would he stay in high school another year when he could go make money on the collegiate level?

Holy Kombucha had reportedly been interested in Ewers even before he decided to reclassify. The offer included both cash and equity in the company.

I may be leaving Texas soon to take it to the next level but I made sure to take the best Texas drink company with me. I am pumped to be representing Holy Beverages @holykombucha for many years ahead so that they will always make sure my fridge is loaded with Holy Tepache pic.twitter.com/ZWmDoZlz6h

the country. So who wants to join the Holy team with me and take Holy and Hope Squad to the next level? You know I like to win. #holybeverages #hopesquad #beveragewithpurpose #holytepache #holykombucha #feelgoodwhilewinning #helpotherswhilewinning

When Ewers does join the Buckeyes, he will enter a headed quarterback battle to replace Justin Fields. Redshirt freshman C.J. Stroud and true freshman Kyle McCord were both five-star recruits in their own right and redshirt freshman Jack Miller was a four-star.

Ewers will make it a four-way competition amongst four freshman trying to earn the starting job. He will arrive at Ohio State with some absurd numbers on his resume.

During his final two seasons, despite missing six games during the 20202 season, Ewers threw for an absurd 6,445 yards, 73 touchdowns and only eight interceptions. He also ran for 701 yards and eight touchdowns on the ground.

It will be interesting to see how the position shakes out in Columbus, considering that in the age of the transfer portal, two or more of the four are likely to leave. The storyline surrounding Ewers, however, has an added twist.

As the top-rated recruit in the history of recruiting, how can he not be the starter on Day 1 like Trevor Lawrence was in history? Does his late arrival to campus hinder his chances? Will he redshirt?

Regardless of where Ewers ends up on the depth chart, he is extremely marketable and will continue to make money. That’s why he made the decision he did.

But what happens if he never earns the No. 1 spot? What happens if McCord (who is reportedly turning heads in camp) or Stroud win the job and never give it back? Will Ewers too find a new home? Will his endorsement deals stop rolling in?

There are a lot of questions to be answered as the Wild, Wild West of Name, Image and Likeness continues to play out. Ewers is simply an interesting case study amid a larger plot.

He’s already making money with Holy Kombucha. His earning power is immense but it will be curious to see if the well ever runs dry.