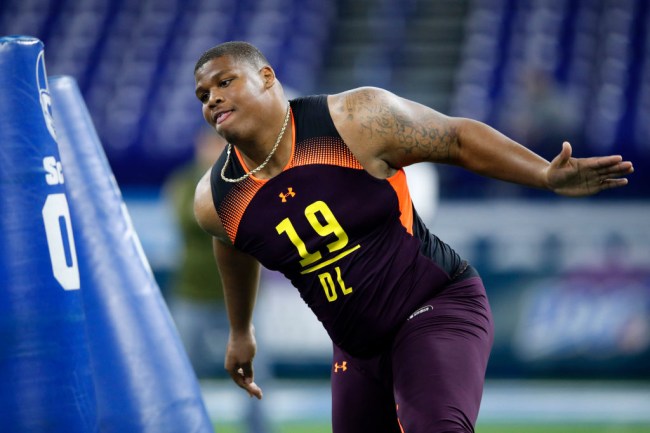 Last week, the top prospects in the country made the trek to Indianapolis for the 2019 NFL Combine, where they were asked to perform a number of physical tasks in addition to answering some absolutely absurd questions for interested teams.

One of those players was former Alabama defensive lineman Quinnen Williams, a 6′ 3″, 303-pound beast who raised some eyebrows after he managed to run an impressively quick 4.87 40-yard dash.

"In the mix for the first overall pick."

What made his time even more impressive is that he recorded it on his second attempt, ignoring the advice of his agent, who suggested the Williams had already run a fast enough time to attract the attention of scouts.

Full transparency: I told Quinnen not to run the second 40 because how great his first time was. He didn’t listen. Decided to bet on himself and BEAT his first time. My type of guy!

If you’re going to make it to the top level of virtually any sport, you’ve got to follow some pretty rigorous routines when it comes to both diet and exercise. While Donald Trump might think college football players subsist on McDonald’s like he does, most athletes aren’t going to make it very far if they’re chowing down on fast food on a regular basis no matter how hard they hit the gym.

As a result, you’d think someone like Williams would have fueled up for one of the biggest days of his playing career, but according to The Athletic, that doesn’t appear to be the case:

Quinnen Williams skipped breakfast Sunday morning. Not because he was nervous about the big day ahead of him at the NFL scouting combine.

“No, I wasn’t nervous at all, I was just ready to go,” the defensive tackle from Alabama said in a phone interview Sunday afternoon. “I just needed a little snack on the way.”

So, Williams grabbed four double-stuffed Oreos and walked over to Lucas Oil Stadium for his workouts in front of 32 NFL teams.

You’ve got to love when bold strategies pay off. Pepper Brooks would be proud.