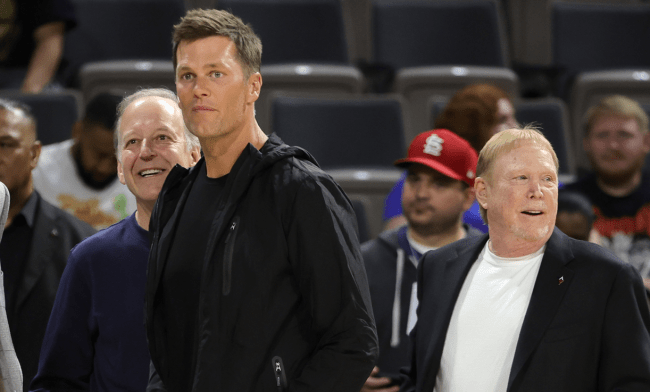 Saturday night, during Rob Gronkowski’s special ESPN+ feed of UFC 278, UFC president Dana White told a story about he supposedly had a deal in place with Raiders owner Mark Davis to have both Tom Brady and Gronk to join the team in 2020.

White said Brady was even looking for houses in Vegas, the deal was so close to being done. (Brady did reportedly purchase some property in Sin City after he was spotted talking to Las Vegas Raiders owner Mark Davis at UFC 246.)

Tom Brady and Mark Davis meet at Connor McGregor vs Cowboy Cerrone.. could Brady be a Las Vegas Raider next season? 🤔 pic.twitter.com/b3zGopQYuV

Dana White, at one point back then, tried to corner Brady on Instagram Live with a little public recruiting on behalf of the Raiders.

“Las Vegas would love to have you here with the Raiders,” White told Brady. “The stadium, the facility is incredible. The training facility that they have outside of Vegas is unbelievable. It’s a 45-minute flight from L.A. Your kids and your family could live there. You could fly back and forth. We want you to come to the Raiders. You know I’ve been pitching you now for a month.”

The rumors of Tom Brady possibly signing with the Raiders in 2020 got so hot that reporters began to get a little under the skin of Raiders quarterback Derek Carr with all of the questions about it.

“I mean, there was a lot of quarterbacks at that fight,” Carr said. “And there was a lot of football players at that fight that are free agents. And it’s like, every time, with my job, it’s always a story. No matter what. And knowing some people that were around, I even know what the conversation was [between Davis and Brady], and it’s like, ‘C’mon, man, when’s it going to end?’”

So there was definitely something going on with Tom Brady and the Raiders, but after Dana White’s comments, Las Vegas Raiders owner Mark Davis claimed to have little recollection about Tom Brady being in talks with the Silver and Black.

“I heard about (White’s comments),” Davis said, according to the Las Vegas Review-Journal. “That was what — two to three years ago or something? I don’t know, man. Talk to Dana. I remember that Tom Brady went to Tampa Bay. That’s basically what I remember.

“I have no idea. Dana has the stories. I love Dana. He is a great, great promoter. Why would this make me upset? I was busy watching (the Raiders beat Miami 15-13) and the basketball game (Saturday).”

He has no idea?

The photo of Tom Brady and Mark Davis at the top of this article is from May 31, 2022 when TB12 was at one of Davis’ Las Vegas Aces games, but Davis doesn’t remember any discussions about Brady coming to Vegas just two years ago?

“How the f–k do you not remember THAT?” one fan tweeted.

In his defense he was at the hair salon.#RaiderNation #raiders #nfl #LasVegas pic.twitter.com/BxWeRf6G2u