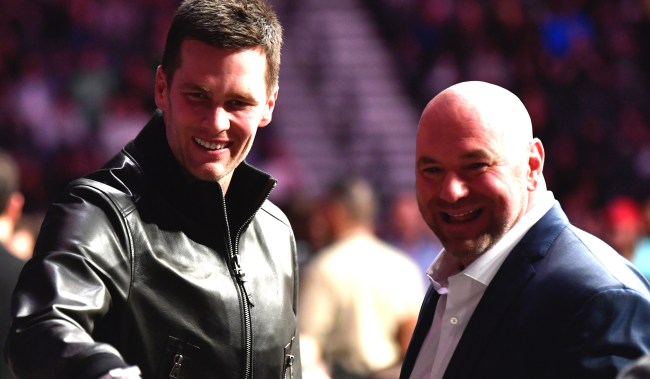 Ever since Tom Brady showed up to UFC 246 and was spotted chatting with Raiders owner Mark Davis there has been serious speculation, much to the annoyance of Derek Carr, that the six-time Super Bowl champion could be taking his talents to Las Vegas.

It also hasn’t helped that Brady reportedly bought some property in Las Vegas recently as he and Gisele are in the process of selling their massive home in Brookline.

On Wednesday, UFC president, Las Vegas resident, and new Raiders season ticket holder Dana White had Brady as his guest on an Instagram Live session as he gears up for UFC 248.

On the show, Brady discussed his free agency decision and the process he’s going through. He also received a very hard sell from White on coming to play for the Raiders in 2020.

“Sure, Ill ask him. Trust me, I’ve been terrorizing Brady,” White admitted to KSNV-TV prior to the show. “If you ever want to rob a bank, do it with Brady. This guy doesn’t say [anything] to anybody. I know I’ve been trying to get him. Wahlberg. Matt Damon and Ben Affleck have been terrorizing him. Everybody from Boston has been terrorizing this guy and he hasn’t been saying anything. Obviously, if he doesn’t sign with Boston, which is where I would like him to be, hopefully he comes to Vegas.”

During the broadcast, White, true to his word, laid it all out for TB12, “The question everybody wants to know: First of all, I’m a Boston guy through and through, I want you to go with the Patriots. But let me make my last pitch, Las Vegas would love to have you here with the Raiders. The stadium, the facility is incredible. The training facility that they have outside of Vegas is unbelievable. It’s a 45-minute flight from L.A. Your kids and your family could live there. You could fly back and forth. We want you to come to the Raiders. You know I’ve been pitching you now for a month.”

Brady still wouldn’t tip his hand, but did tell White, “I know it’s been a lot of patience for me. And obviously being where I’ve been for 20 years, it’s been an amazing experience and I don’t know what the future holds right now. I’m just trying to be patient through this process. It’s my first time going through it. And, in the meantime, I’m going to spend a lot of time with my family over the next 10-12 days and we’ve got a little vacation planned, which I’m looking forward to.”

So, where Brady ends up playing in 2020 is still anybody’s guess. Will it be in Las Vegas? Or New England? San Francisco? Tennessee? Los Angeles? They’re all reportedly in play.

One thing is for sure when it comes to Brady and the Raiders: he won’t be coming to Las Vegas because of this hype video.