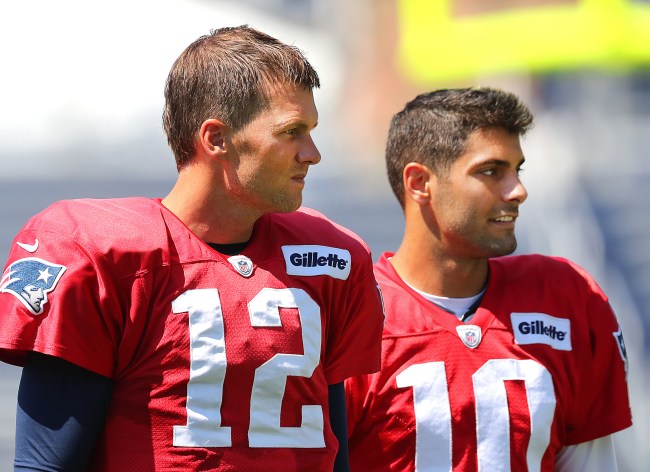 If it seems like every single day there’s a different rumor about Tom Brady’s future that’s floating around, it’s because there is, with everyone wondering where the six-time Super Bowl champ may or may not end up this NFL offseason. The future Hall of Famer has been linked to teams like the Los Angeles Chargers, the Las Vegas Raiders, the Tennessee Titans and even the Miami Dolphins, with people trying to use inside sources to get a leg up on what the soon-to-be free agent might decide.

While the entire Internet tried to decipher a video of Brady and Patriots wideout Julian Edelman over the weekend — where many wondered if the quarterback denied Edelman’s claim that Tom was “coming back” — no one really knows for sure what the signal-caller’s thinking right now. Does he stay in the system that’s led to nine Super Bowl appearances and those six titles, or go elsewhere to prove he can do it without the legendary Bill Belichick? Only time will tell.

Among all the rumors and reports out there, there’s one that is picking up steam: A Tom Brady-Jimmy Garoppolo trade, with the latter returning to the team that drafted him, with the former returning to the team he grew up rooting for. Could this actually happen, though? Before you scoff at such a suggestion, just look at what longtime Patriots reporter Tom Curran had to say the other day on SiriusXM NFL about the idea.

“It’s either gonna be New England or Tennessee,” Curran said, “with the 49ers closing hard on the outside.”

“That would be the best-case scenario all the way around,” Curran said.

Curran is extremely plugged into what’s happening with Tom Brady’s future, given his role and presence around the team. So the fact that he’s buying into the thought that Brady for Garoppolo could be realistic carries some serious weight.

In addition to Curran stating the above, Boston Herald writer Karen Guregian echoed the report, offering up some legit reasons why the two quarterbacks could be swapped for one another.

What do my sources say? Curran “might be onto something.”

Forget good friend Mike Vrabel and the Titans for a minute. If the Niners’ interest is mutual and real, which appears the case on both sides, they are the greatest threat to lure Brady away from New England.

Between having a roster that was close to winning a Super Bowl last month, having cap maneuverability if GM John Lynch doesn’t pick up Garoppolo’s option in April and Brady’s local roots having grown up in the Bay Area, San Fran would be in the driver’s seat to land the six-time Super Bowl champion.

On the surface, it might be difficult to imagine Tom Brady’s future being with the 49ers — especially after the team just went to the Super Bowl with Jimmy G as their quarterback — but, of all the teams he’s being linked to, doesn’t it seem like the Niners are the one that makes the most sense? He’s a Northern California kid, who grew up idolizing Joe Montana and cheering for the franchise. Plus, the roster is stacked for another run at a title, and Brady could be the one to lead them to the promised land.

As for Jimmy Garoppolo, prior to the Pats trading him during the 2017 season, there were rumors that Belichick and Pats owner Robert Kraft were at odds about which quarterback they favored. Kraft seemed to prefer Brady, while the head coach preferred Garoppolo. Naturally, the man who writes the million-dollar checks won. But it leaves the door open for a possible reunion now three years later.

Could the former predecessor replace the legend in New England after a couple years away? It’s an interesting hot take that seems to be picking up plenty of steam, so we’ll have to see what Tom Brady’s future holds in the coming weeks as free agency approaches, and if Jimmy Garoppolo finally gets his chance to take over the reins with the Patriots.